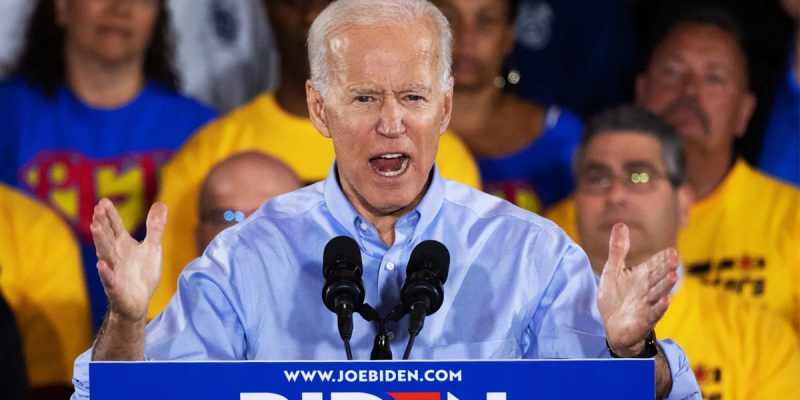 That isn’t a homer statement on behalf of Donald Trump. It’s just the truth. Particularly if what Biden put on the table yesterday in a speech to a crowd of less than 1.000 union activists in Pittsburgh is all he has.

Here were some highlights, or rather, lowlights, of Biden’s mumbling, incoherent stump speech…

Here's a fantastic montage of Biden stumbling and bumbling through his low-energy stump speech: pic.twitter.com/QUeBJj1PhZ

The thing to understand about Biden is he’s run for president several times before and in each case several things were true. First, Biden always ends up amid a controversy over plagiarism of somebody else’s speeches (Neil Kinnock was the most notable one), or something wildly inappropriate he says – like when he said you have to have an Indian accent to work at 7-11 or Dunkin’ Donuts, or when he called Barack Obama “clean” and “articulate.”

And second, he raises no money. That may be a problem of the past this time, as Biden raised some $6 million in the first day after his announcement last Thursday. But whether Biden can continue raising money faster than he can spend it is a very real question – he’s never managed that before. Biden’s reputation is that he’s poison for major donors, because when they hear him on the phone or see him in person he doesn’t inspire confidence.

Third, he gets no votes. Biden has never been able to poll above 10 percent in any party primary he’s participated in as a presidential candidate, and there’s a reason for it – Joe Biden comes off as a buffoon, rather than a leader. He was a semi-acceptable vice president under Obama, because nobody had to take him seriously then. But when he’s asked for the opportunity to actually run things nobody has been very interested in letting him do it.

Add to that the two additional problems of Biden’s family ties to China, which make him look a whole lot more compromised by a foreign power than the Democrats could ever make that charge stick to Trump, and his history of creepy-if-not-outright-inappropriate groping of female acquaintances in public, something which is very much out of place in a Democrat Party which can’t tell the difference between boys and girls much less wrap its head around what is innocent and friendly conduct and what constitutes sexual assault, and Biden is an implosion waiting to happen.

That implosion is a foregone conclusion. The question is how far along the campaign trail Biden goes before the bottom falls out.

And if he’s going to stumble through his stump speeches like he did Monday, that implosion won’t be long in coming at all.