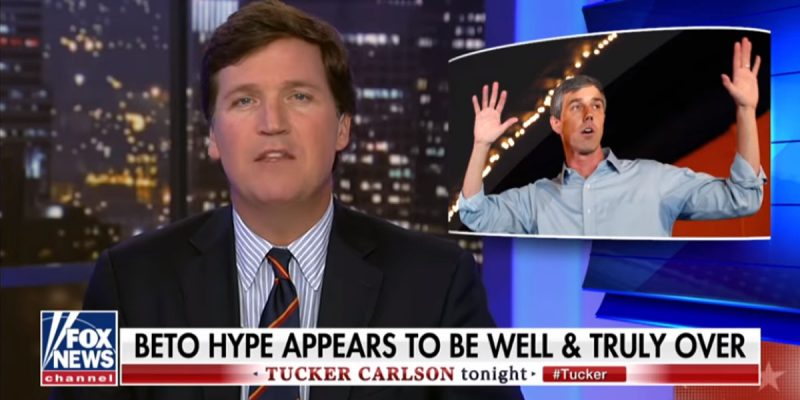 You might think it’s too early to pronounce Beto O’Rourke’s fledgling presidential campaign dead, but you’d be wrong – something Tucker Carlson made excruciatingly clear Wednesday night to any and all who might have harbored doubts on that score.

Carlson got hold of video from an O’Rourke campaign speech at the University of Virginia in which the candidate delivered a series of word salads aimed not at articulating a coherent policy platform but rather a melange of platitudes intended to hook unsophisticated college kids into duplicating his status as the meme-centric lowest-common-denominator candidate for the 2020 presidential campaign that he was as a senatorial opponent against Ted Cruz.

But this race isn’t much the same as that one was, is it? Last year O’Rourke was the sole hopeless hopeful running against the incumbent Cruz, and as such was the recipient of heavily out-of-state financial support solely dedicated to his candidacy. It didn’t really matter who he was, because Democrats across the country wanted to beat Cruz and the 45 percent or so of the electorate in Texas which is essentially base Democrat vote was with him. $85 million later in that Senate race Beto finished with 48.3 percent of the vote to Cruz’ 50.9, an uncomfortably close tally for Cruz to be sure, but hardly a wise investment of campaign funds for national Democrats to have spent.

That wasn’t a particularly salutary result for a future presidential candidate, but as we’ve noticed given the current field it was hardly sufficient to dissuade Beto from making the jump to the 2020 presidential field with its assembled multitudes of pretender candidates. Of course he got in, and of course he immediately ran into a brick wall of changed expectations – Beto wasn’t running against Cruz in front of a Democrat audience; he was up against two dozen other leftists with similarly questionable resumes and similarly goofy policy ideas. Nothing about him stands out, all of a sudden.

And as Carlson points out, O’Rourke has a worse problem – namely, that South Bend, Indiana mayor Pete Buttigieg (pronounced Booty-judge, as best we can tell) brings all the same vapid leftist policy pronouncements in the same vapid upper-middle class unthreatening tone with the same empty political resume as O’Rourke does, but with a clearly superior identity along the intersectional/cultural Marxist spectrum. Namely, Buttigieg is, unlike O’Rourke, openly gay – and according to the current Democrat identity politics totem pole that makes Buttigieg’s opinions more valuable than those of a straight white man – even one who fraudulently offers himself as a Mexican based on a nickname foisted on him by the family domestic help of his childhood.

Here’s the video of Carlson’s evisceration of Beto. It’s well worth eight minutes and change of your time.