It’s been fun to watch the development of Ralph Abraham from this nice old guy and relatively nondescript Republican congressman from the middle of nowhere in northeast Louisiana to a capturer of news cycles and maker of headlines at the Breitbart.coms of the world. Because make no mistake, that’s what Abraham is becoming.

In response to the news that Burr had subpoenaed Trump Jr., Abraham tweeted that there was no collusion, the investigation should end, and people should be focused on working together now to help Trump make the country better:

What part of NO COLLUSION is hard to understand? The US is booming under @realDonaldTrump – imagine if people quit trying to undermine him and worked with him.

And let me know when the investigation for Hillary’s collusion begins…https://t.co/ioxqKyp0nt

As Breitbart noted, it wasn’t just Burr Abraham took a poke at for perpetuating the Trump-Russia hoax. He also rubbed up against criticism of a fellow member of the Louisiana congressional delegation when he popped Cedric Richmond for his own babblings about impeachment a week or so back…

Louisiana elected @realDonaldTrump and we're going to re-elect him. Radical calls from Louisiana Democrats to impeach OUR PRESIDENT should be condemned.

This comes amid last week’s coup de grace in which Abraham called out John Bel Edwards for threatening to sue oil and gas companies if coastal parishes he was trying to incentivize to do so didn’t take his advice. At an oil and gas industry day event all the gubernatorial candidates attended Abraham ripped up a copy of Edwards’ letter making that threat and said “Never again” to a rousing round of applause.

He’s getting a little spicier as a candidate, and showing off some fight. That’s the kind of thing Louisiana voters like in their candidates, so it’s not surprising Abraham is slowly reeling in John Bel Edwards in those polls.

As a postscript to this, you’ll notice that increasingly when Abraham pops off on these issues, like when he hit Richmond for his unhinged impeachment talk, he’s demanding that Edwards address his own position on these topics. Which Edwards will not do, because he’s determined to run away from any and all discussions of things Democrats are doing in Washington – even if, like Richmond, those Democrats happen to be from Louisiana.

After all, this is what happens when you attempt to engage Edwards on Twitter for things he says which are difficult to defend… 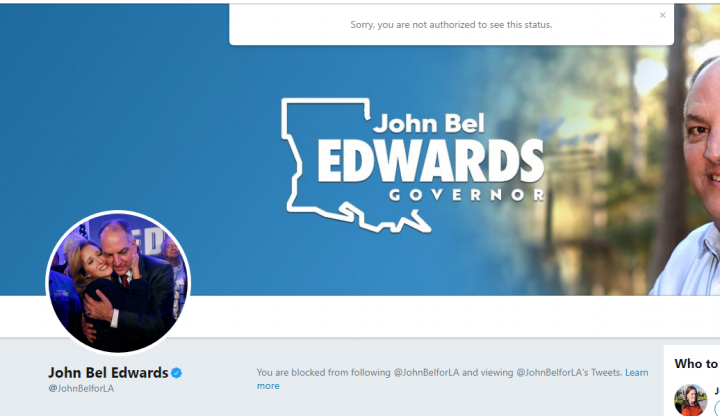