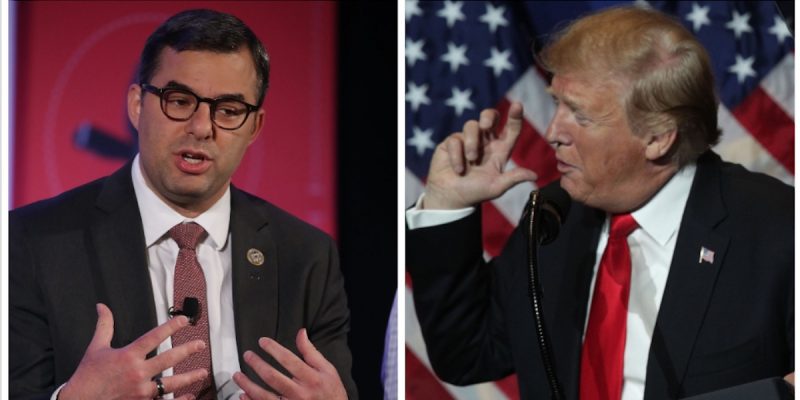 There is a phrase commonly used for criminals who point guns at police officers, “suicide by cop”. Well, that is the best metaphor for what U.S. Representative Justin Amash (R-MI) did over the weekend.

Congressman Amash has become known for his unconventional politics and libertarian streak. His fierce independence and “principle over party” rhetoric has garnered a passionate following.

Unfortunately for him and his fans, he may be in trouble after his ill-advised decision to not only publicly criticize the popular, same-party President but refer to some actions as “impeachable”.

Within hours, President Trump repudiated and ostracized the Representative via his favorite medium of communication when he tweeted:

“Never a fan of @justinamash, a total lightweight who opposes me and some of our great Republican ideas and policies just for the sake of getting his name out there through controversy. If he actually read the biased Mueller Report, “composed” by 18 Angry Dems who hated Trump,….”

“….he would see that it was nevertheless strong on NO COLLUSION and, ultimately, NO OBSTRUCTION…Anyway, how do you Obstruct when there is no crime and, in fact, the crimes were committed by the other side? Justin is a loser who sadly plays right into our opponents hands!”

Rep. Amash decided to double-down, explaining his reasoning and further making the case for impeachment when he tweeted,

“Contrary to Barr’s portrayal, Mueller’s report reveals that President Trump engaged in specific actions and a pattern of behavior that meet the threshold for impeachment.”

Liberal sweetheart Alyssa Milano piled on by tweeting, “This brought tears to my eyes, thank you for being brave, Justin.” It is a tweet Justin could have gone without as her association only further isolates him from the conservative base of his own party.

The “brave” stand will likely cost his re-election campaign the support of both the President and the Republican National Committee along with all the resources that come with it.

Regardless of the “suicide by Trump” and leftist praise, Rep. Justin Amash maintains a perfect 100% voting record with Freedomworks and is consistently ranked as one of the most conservative members of Congress.

The young Congressman should pray that his constituents engage in the Christian practice of forgiveness or he may need to consider running for re-election as an Independent.