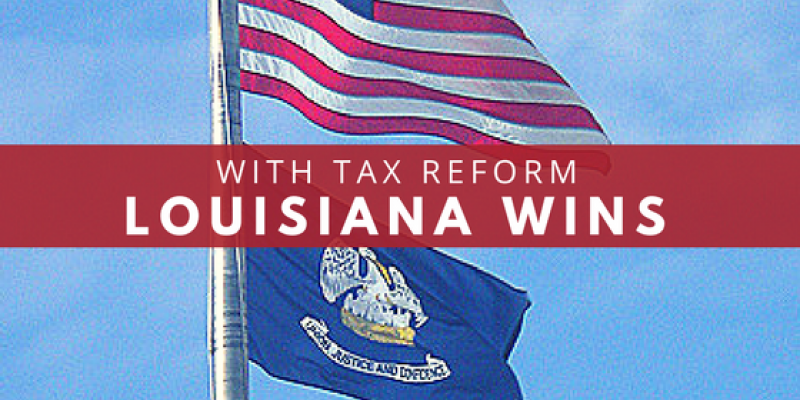 Louisiana is among nine states in which tax revenue has not yet fully recovered since the Great Recession, and among five states whose tax revenue did not increase in the third quarter of 2018, after accounting for inflation, according to a report published by Pew Charitable Trusts.

Forty-one states saw tax revenue grow during that time period, demonstrating their full recovery from the Great Recession, after accounting for inflation, the report states. Without adjusting for inflation, 50-state tax revenue was 32.8 percent above peak, with tax collections recovering in 48 states (excluding Alaska and Wyoming) by the third quarter of 2018.

“State tax revenue turned a corner in late 2017 after the weakest two years of growth – outside of a recession – in at least 30 years,” the report states, and Louisiana was not among them.

Louisiana’s tax revenue growth was 4.7 percent below its peak. And its growth rate as a percentage of state personal income ranked fourth from last nationally. It held an annual growth rate of 1 percent since the fourth quarter of 2007, according to the report.

“This is important because tax collections determine in large part the ability of states to deliver public goods and services to its residents, and it means Louisiana had less purchasing power to deliver those goods and services than before the economic downturn,” Fiscal 50 Officer Justin Theal of the Pew Charitable Trusts said.

Louisiana’s recovery has been rocky since 2010, Theal notes, pointing to contributing factors including energy prices.

“As an energy state, an important part of Louisiana’s tax revenue depends upon the price of oil and natural gas, so the boom and bust cycle of energy production has influenced the state’s recovery,” he said.

States reporting revenue gains increased in part because of the 2017 federal Tax Cuts and Jobs Act, in conjunction with favorable economic conditions, strong stock market returns for more than one year and state policy actions, the report states.

Individual tax streams fluctuate and contribute to states’ overall revenue volatility, the report adds. Nationwide, overall state tax revenue had a volatility score of 5 for the 20 years ending in Fiscal Year 2017, meaning total tax revenue fluctuated 5 percentage points above or below the overall growth trend, similar to 2016. Tax revenue was more volatile than the national benchmark in 30 states and less in 20 states.

In Louisiana, tax revenue volatility was the 9th-highest in the U.S.

The score measures the variation in year-over-year percent changes between fiscal 1998 and 2017 based on a calculation of standard deviation. The lower the score, the steadier tax revenues were from year to year, as with the lowest ranking Kentucky and South Dakota, which each had a score of 2.7, compared to Louisiana’s 7.4. The higher the score, tax revenue grew or declined more dramatically, as with Alaska’s score of 37.6.

Louisiana’s rainy day fund was enough to pay the state’s bills for 30 days or more between 2006 and 2010. By Fiscal Year 2018, the state had enough funds to operate for 12 days, accounting for 3.3 percent of state spending.

“Louisiana’s financial problems stem mostly from unfunded retirement obligations that have accumulated over many years,” according to an analysis by the fiscal-conservative think tank, Truth In Accounting (TIA).

“Louisiana’s reported net position is inflated by $2.4 billion, largely because the state defers recognizing losses incurred when the net pension liability increases,” TIA says. “Despite reporting all of its pension debt, the state continues to hide $2.6 billion of its retiree health care debt.”

“Louisiana’s financial condition is not only alarming but also misleading as government officials have failed to disclose significant amounts of retirement debt on the state’s balance sheet,” TIA adds.

Although states can raise or lower tax revenue by changing tax policies, the underlying volatility of individual tax streams is often driven by a variety of factors, including industry, natural resources, workforce, and population growth, federal budget changes and natural disasters, the Pew report states.