…and you can only see a few of the Advocate’s articles before being accosted with something like this: 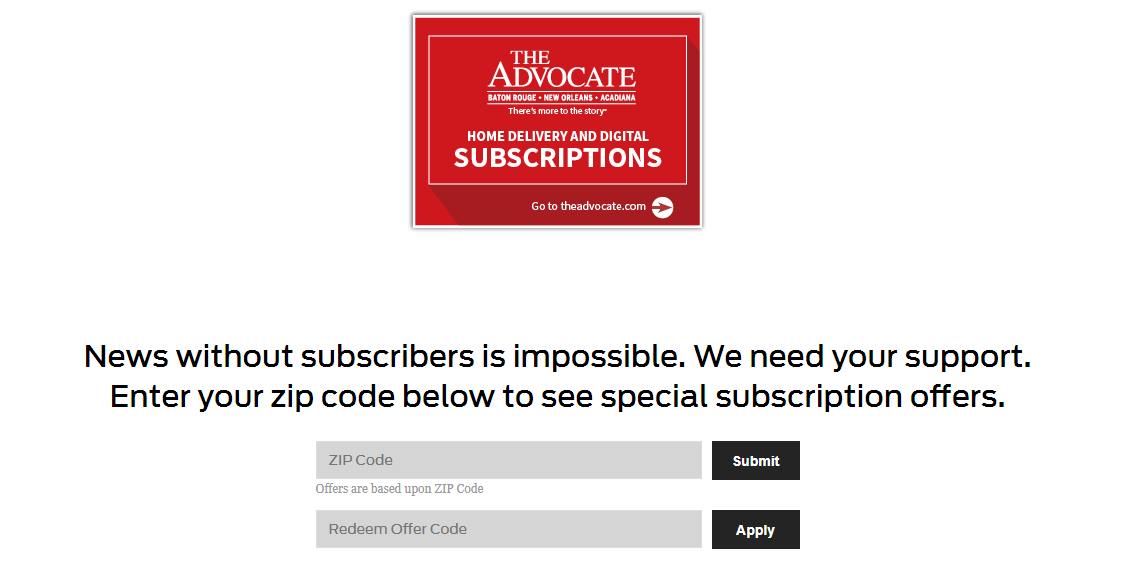 “News without subscribers is impossible” isn’t actually true, as there are lots of online sites providing content much better than the Advocate’s without attempting to charge for subscriptions.

This is unlikely to produce the level of revenue the Advocate’s management is hoping for. Essentially what they’re doing is to cede their online traffic to WBRZ and WAFB’s websites for daily news, and largely tube their editorial reach.

And it’s interesting, because when John Georges bought that paper a few years ago everybody more or less figured that The Advocate was essentially going to be Georges’ vanity publication. He tried his hand at elective office and was humiliated, first running for governor in 2007 and ending up a blip on the screen and then running for mayor of New Orleans in 2010 and doing even worse. Buying The Advocate and then launching it into New Orleans was a way for him to be a political player without having to win an election.

Maybe Georges isn’t satisfied with how that is working out. Maybe he’s decided it’s too expensive a hobby.

But by putting all of The Advocate’s content behind a paywall, an interesting effect here will be that Georges is going to end up having less political influence than he’s had. The Advocate, after all, had a fairly sizable effect on the 2015 election in Louisiana – siccing Tyler Bridges on David Vitter for article after article about old hooker stories, and then reporting – woefully inaccurately, as it turned out – on a pair of Vitter-related items just before the primary clearly deflated Vitter’s showing. A week before the primary there is a story accusing Vitter of trying to “spy” on then-Jefferson Parish sheriff Newell Normand, when all Vitter’s campaign did was to send someone to Normand’s usual coffeehouse haunt to use the “record” app on his phone to listen in as Normand bloviated about how he was going to destroy Vitter in Jefferson Parish.

Then another story reporting a fender-bender involving a car in which Vitter was a passenger was even more damaging – the way The Advocate made it sound, Vitter was in a wreck with an “unidentified female” in the car and left the scene, as though the old stories of marital infidelity with prostitutes had never really gone away. What actually happened was that Courtney Guastella, his campaign fundraiser, was driving Vitter to a campaign event and got in an accident. Someone else in the campaign rushed to the scene to transport Vitter to the event while Guastella dealt with the insurance information exchange and the police report. It was a non-story made to look like an earth-shaking event.

Would Vitter have lost anyway? Quite possibly. But The Advocate did move the needle, particularly in pushing Vitter primary votes to Scott Angelle.

What happens this year, though, when The Advocate’s content is behind a paywall and lots of the state’s voters go elsewhere for political news?

It would seem that paper is voluntarily giving up a lot of its influence. And since The Advocate has been so slavish in its devotion to John Bel Edwards’ cause, it would seem that the paywall decision is a bad sign for Edwards’ re-election.

We’ll see. But we’ve got no plans to subscribe to The Advocate, nor do we have any plans to charge for any content here at The Hayride.