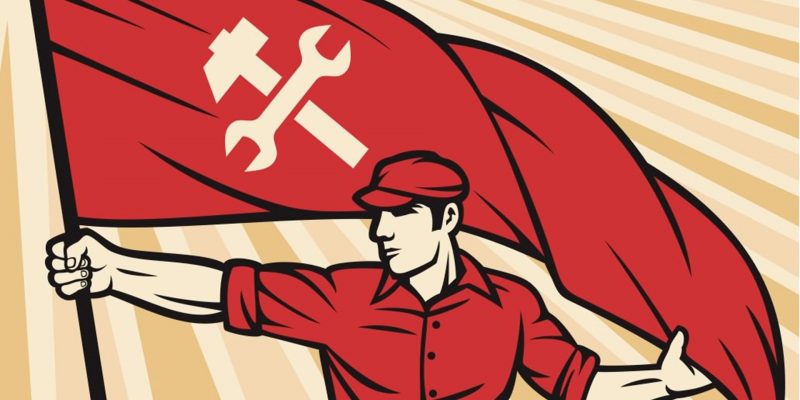 The AFL-CIO released a video on Twitter on Tuesday which embraced communism and called on workers to seize the means of production. The video by Dan Whelan, who self-identifies as a Marxist roofer, said that the middle class is a fiction.

Whelan says that the concept of the middle class is a fiction used by the rich and the media. He says that it is used to drive a wedge between various sectors of the working class to keep them from uniting.

Whelan’s video not only promotes the Marxist concept of class, but it is also a sharp break from the AFL-CIO’s own history of opposition to communism. In fact, the AFL-CIO has been explicitly anti-socialist and anti-communist from its founding.

From the late nineteenth century through the Cold War, a much more powerful and politically independent (if still left-leaning) labor union movement—epitomized by the American Federation of Labor (later the AFL-CIO) under its leaders from Samuel Gompers to Lane Kirkland—was a bulwark of liberal anti-Communism. It supported American intervention against Communist rule in Asia and financially supported the Solidarity labor movement in Poland that helped usher in the collapse of the Soviet Empire.

Gompers, the founding president of the American Federation of Labor, perhaps unwittingly laid the foundations for this anti-socialist, pro-mixed-economy history by rejecting Marxist revolutionary thought in the late nineteenth century despite his commitment to working-class interests. Gompers wrote as early as 1877 (predating the AFL’s founding) that the working class should turn to “purely industrial or economical class organizations with less hours and more wages for their motto.” Then AFL president Gompers put this into practice by focusing on securing collective bargaining for union members rather than explicitly political activities like the Presidential campaigns of Socialist Party leader Eugene V. Debs.

The AFL-CIO was anti-communist until relatively recently. Starting from the mid-1990s, the AFL-CIO’s membership has largely been government employees, who see an ever-larger state as key for their prosperity. Private sector union membership has been shattered by deindustrialization and right to work laws on the state level.

But AFL-CIO has not been explicitly endorsing Marxism until very recently. As Marxism has grown more in favor among the left, the AFL-CIO has been trying to stay relevant among progressives. This video only shows that the left is moving towards Marxism and its evil, destructive tendencies.