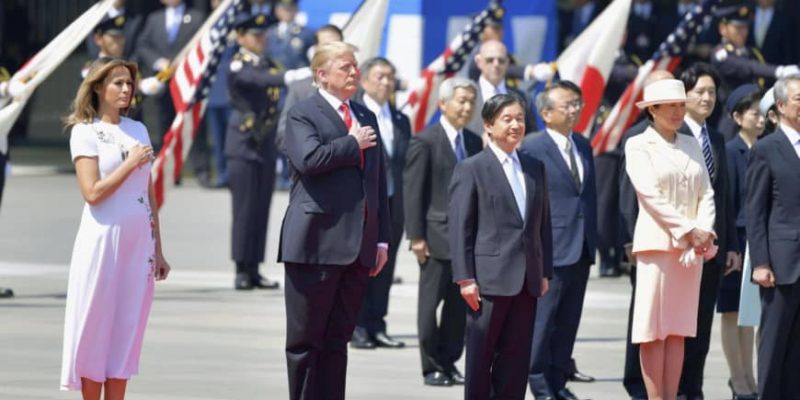 Emperor Naruhito came to power following the resignation of his predecessor Emperor Akihito, an occurrence that has not happened in more than 200 years.

It is a great honor and tremendous indicator of the positive relationship between Japan and the United States especially given America’s less than ideal relationship with neighboring China.

It was enough to persuade the Trump White House to break with tradition of Memorial Day Weekend when Presidents usually lay a wreath at the Tomb of the Unknown Soldier.

Instead, the President and First Lady visited Arlington National Cemetery before boarding Air Force One for Japan. Additionally, the President gave a rousing speech to the men and women serving on the USS Wasp.

The trip began with a welcoming ceremony at the Imperial Palace and concluded with a State Dinner in the evening. The Emperor of Japan pledged that, “our two countries will continue to contribute to peace and prosperity in the world.”

According to Japan Times, the First Family “went all out” on their gifts:

“The Trumps presented a vintage 1938 viola made in the United States to the emperor, who is known for playing the instrument. They gave the empress a White House desk set including a fountain pen, handcrafted out of a red oak tree from the grounds of Harvard University.”

The mainstream media tried to spin the President’s trip as disrespectful on memorial weekend but Trump was welcomed with roaring applause by the men & women aboard the USS Wasp.

President Trump explained that Japanese President Abe helped him make the decision to go on the trip when he explained that it was “100 times bigger” than the Super Bowl.