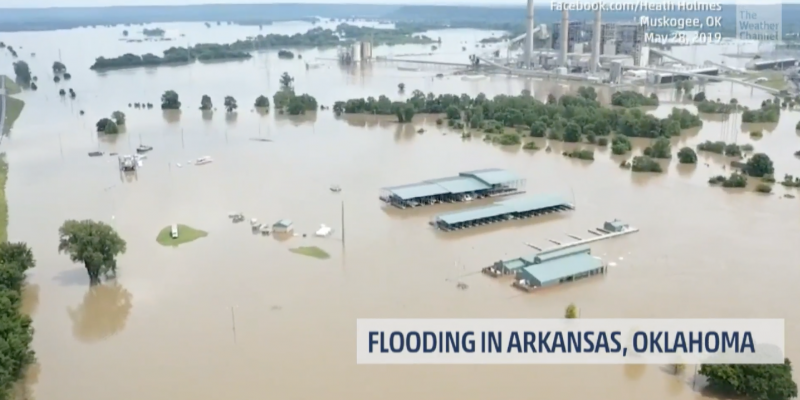 Areas throughout Oklahoma have topped their flood levels along the Arkansas River, KATV reported.

Tulsa Mayor G.T. Bynum said, “We are asking for everyone to prepare for the worst-case scenario … the worst flood in our history.”

“This is the culmination of a flood that is now in its fourth week,” David Williams, the U.S. Army Corps of Engineers Tulsa District chief of hydrology and hydraulics engineering, told tTulsa World. “I know that it seems like only a weeklong event or so, but we’ve had excessive rainfall in the basin for a month now.”

Many farms along the Arkansas River– from Tucker, Oklahoma, to Ozark, Arkansas– have already been flooded, according to the Times Record.

This is our farm just over the border from Fort Smith, AR in Oklahoma. The silos, feedlot, shops, and farmhand’s house all underwater and still rising. All equipment, animals and people were safely moved out. Total crop loss this year. pic.twitter.com/I3CFtkzTwX

In Kansas, Gov. Laura Kelly declared a state of disaster in 49 of Kansas’ 105 counties, the Kansas City Star reported. She also requested federal disaster relief funding for a range of services.

Once again we flew @GovLauraKelly and @KansasEmergency to observe some of the reservoirs in the state. Today we flew to Tuttle Creek Lake, Milford Lake, and Perry Lake. The video shows the release of water from Perry Lake this afternoon. #kswx pic.twitter.com/A9BVTJcQzx

In Missouri, Gov. Mike Parson called up the National Guard to help respond to flooded areas. “As our state continues to recover from severe storms & damaging flooding, and local resources deplete, I am confident in the Guard’s capabilities to make a difference at this critical time,” he tweeted.