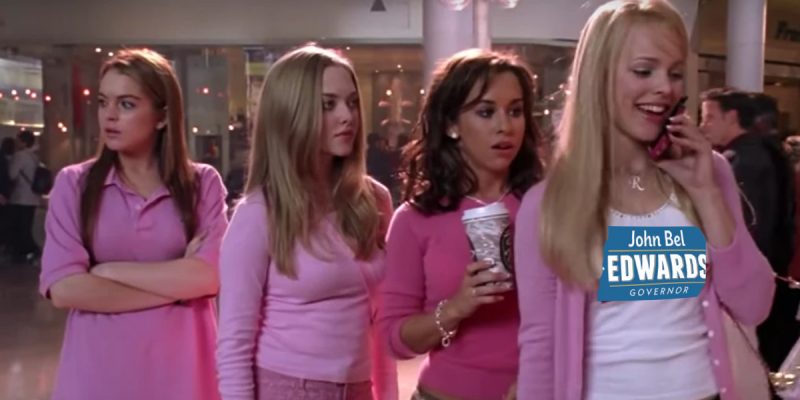 By way of quick explanation, when we say “Mean Girls” we’re talking about the three people in charge of campaign communications for Gov. John Bel Edwards – Richard Carbo, Eric Holl and Stephen Handwerk, the last of whom actually works as the Executive Director of the Louisiana Democrat Party but essentially parrots everything the other two say. There is a fourth member of the campaign flack crew – that being Zack Hudson, who works for the David Brock/Media Matters-funded American Bridge PAC as a communications flack for their efforts in gubernatorial races across the country. But Hudson, who first achieved notice in Louisiana as the campaign guru for Stormy Daniels’ publicity-stunt faux Senate run against David Vitter in 2010, is more of a Billy Preston to Carbo, Holl and Handwerk’s Beatles. If you’d like to throw Trey Ourso, the Democrat consultant in charge of the trial lawyer- and nursing home operator-funded Gumbo PAC supporting Edwards, in as a secondary Billy Preston, that’s fine too.

Why Mean Girls? Well, it’s really the only accurate way we could think of to characterize the style of communications the Edwards’ camp shares. When it comes to the governor’s political opponents or those who disagree with him, there is usually only one reaction – screeching outrage and overreaction.

And it’s starting to look like Ralph Abraham’s campaign is realizing how to use that as an asset in winning news cycles.

Last week all three of the major candidates in the gubernatorial race, Edwards, Abraham and Eddie Rispone, addressed the Louisiana Farm Bureau convention at the Marriott Hotel in New Orleans. If you saw any coverage of that affair, what you probably know is that the state’s media breathlessly reported Edwards received a warm ovation from the attendees. You don’t know that both Abraham and Rispone received the same – some even maintain Abraham’s reception was warmer than the one for Edwards.

But Abraham, who of the three is the only actual farmer, had released a digital spot to his Facebook page as an homage to the famous 2013 Dodge Ram commercial that used the famous Paul Harvey “God made a farmer” voiceover. Rather than waste you time describing it, let’s just show it to you…

Abraham’s camp figured they’d slap his logo on that old Dodge ad and see if they could provoke a reaction that would create a news story and get him some earned media – because why not?

And they figured right. No sooner did that video hit the internet than the Mean Girls went ballistic.

Hey @LionelRainey3 y'all need to hire someone who went to the @ManshipSchool and took a media law class.

This isn't even close to fair use. I know y'all have to get creative because you can't raise much money, but stealing a Superbowl ad? woof. #lagov #lalege https://t.co/zMwquUWo1x

With how fond @RepAbraham is of stealing Gov. Jindal’s policies, it shouldn’t be a surprise that he’s stealing commercials too. #lagov #lalege https://t.co/iGdRaoHFyU

1st he’s recycling Bobby Jindal’s policies, then he was rippin off @JohnBelforLA’s 2015 campaign slogan, now @DocAbraham is trying to pass Super Bowl commercials off as his own.

And just like that, a relatively nondescript bit of social media content, albeit with a slight hook of controversy, then became a news story picked up by TV stations in every market of the state.

Notice the screeching by Edwards’ campaign team, who act as though it’s their own copyright being violated.

As the ad created a media presence, Fiat/Chrysler did issue a statement about it – to the effect that no, Abraham didn’t get their permission to slap his logo on their ad, and no, they don’t have an endorsement to offer in the Louisiana governor’s race. What Fiat/Chrysler did NOT include in their statement was a demand to take the ad down.

That’s two minutes of solid coverage in the Baton Rouge TV market for Abraham which amounts to thousands of dollars of publicity in prime time, hammering home the message that Abraham is a farmer for farmers and epitomizes the values vocalized in the Paul Harvey narrative.

Yes, there’s a controversy over the “stealing” of the ad. Let’s remember, of course, that Fiat/Chrysler is getting a free run of an iconic Dodge spot on TV all over Louisiana – nobody at corporate headquarters is really all that upset about their own earned media emanating from this. They’re certainly not as upset about it as the Mean Girls are.

And meanwhile, that Ralph Abraham Facebook video has been viewed more than 30,000 times in a week – with the campaign having spent almost no money whatsoever to produce or distribute it.

It’s the kind of earned-media hit political professionals dream of. And it wouldn’t be possible but for the amplification Carbo, Holl and the rest of the Mean Girls applied to it.

Interested in more national news? We've got you covered! See More National News
Previous Article SADOW: Some Of Louisiana’s Local Governments Are Spending Themselves Into Oblivion
Next Article Redistricting Supreme Court Decision Could Have Massive Effect On Southern Elections