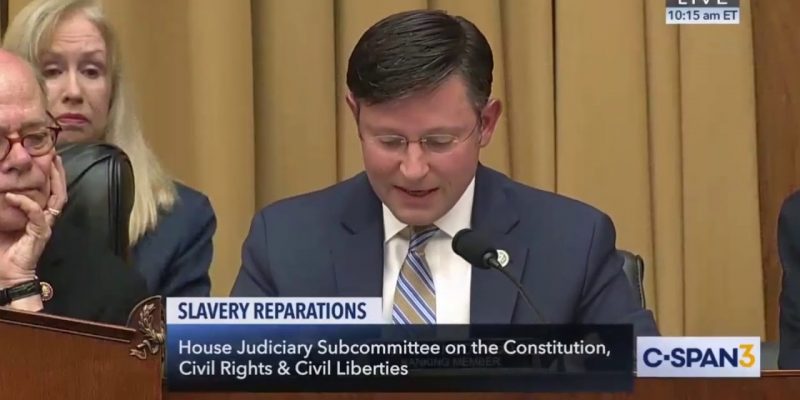 Our friend Congressman Mike Johnson (R-La)  was booed by liberals in the crowd at a hearing in Congress yesterday for the grievous sin of daring to disagree.   Johnson is the ranking Republican on the House Judiciary Committee’s Subcommittee on the Constitution, Civil Rights and Civil Liberties, which was holding a hearing on so-called reparations to descendants of slaves.  Johnson, a noted constitutional attorney and scholar, dared to point out that reparations would almost certainly be unconstitutional on their face. When confronted with a compelling argument, liberal spectators did that which comes naturally to them: boo the messenger.

The bill at issue is by Rep Sheila Jackson Lee and various co-sponsors including Louisiana’s own Rep Richmond (How could we guess) and, according to the text of the bill, it’s purpose is

To address the fundamental injustice, cruelty, brutality, and inhumanity of slavery in the United States and the 13 American colonies between 1619 and 1865 and to establish a commission to study and consider a national apology and proposal for reparations for the institution of slavery, its subsequent de jure and de facto racial and economic discrimi- nation against African-Americans, and the impact of these forces on living African-Americans, to make recommendations to the Congress on appropriate remedies, and for other purposes.

In other words, Rep Lee wants today’s citizens to pay money to the descendants of victims of slavery from 150+ years ago.

It is certainly worth noting that Rep Lee is not what you might consider to be a constitutional authority.   She once proudly proclaimed that the constitution was some 400 years old, making it older than the country itself.  For those of you wondering, we believe that was indeed before Neil Armstrong landed on Mars.

Yet, it bears noting that Rep Johnson is exactly right in his legal analysis: Rep Lee’s bill is unconstitutional on its face.  Rep Johnson brought up the US Supreme Court case of Croson v Richmond. In 1983, Richmond, Virginia, in a far-fetched attempt to correct past discrimination, mandated that 30% of city contracts must go to minority owned firms. The Supreme Court, in a 6-3 opinion by then Justice O’Connor, roundly rejected the practice:

In sum, none of the evidence presented by the city points to any identified discrimination in the Richmond construction industry. We, therefore, hold that the city has failed to demonstrate a compelling interest in apportioning public contracting opportunities on the basis of race. To accept Richmond’s claim that past societal discrimination alone can serve as the basis for rigid racial preferences would be to open the door to competing claims for “remedial relief” for every disadvantaged group. The dream of a Nation of equal citizens in a society where race is irrelevant to personal opportunity [488 U.S. 469, 506]   and achievement would be lost in a mosaic of shifting preferences based on inherently unmeasurable claims of past wrongs. “Courts would be asked to evaluate the extent of the prejudice and consequent harm suffered by various minority groups. Those whose societal injury is thought to exceed some arbitrary level of tolerability then would be entitled to preferential classifications . . . .” Bakke, 438 U.S., at 296 -297 (Powell, J.). We think such a result would be contrary to both the letter and spirit of a constitutional provision whose central command is equality.

In other words, legislation needs to address current problems. In her bill, Rep Lee identifies several problems the bill is intended to address, including the African-American poverty level and incarceration rate:

African-Americans continue to suffer debilitating economic, educational, and health hardships including but not limited to having nearly 1,000,000 black people incarcerated; an unemployment rate more than twice the current white unemployment rate; and an average of less than 1⁄16 of the wealth of white families, a disparity which has worsened, not improved over time.

Yet her bill is short on how payment of money would cure these ills.  The Supreme Court, as noted above, has held time and time again that any affirmative action program must be narrowly tailored to achieve a compelling governmental interest.  Even assuming that the issues noted by Rep Lee implicate a compelling governmental interest, Rep Lee fails to specify how paying money is narrowly tailored to achieve those goals.

This is why, as Rep Johnson pointed out, the bill is fatally flawed:

Affirmative action programs like this must cure present ills, not past ones.

Rep Lee is a race-baiter of the old-school and her thinly veiled discrimination against anyone not African-American is as despicable as her constitutional remarks. Reverse discrimination is as insidious as historic discrimination. Discrimination on the basis of race is wrong no matter who is on the receiving end of it.

Interested in more national news? We've got you covered! See More National News
Previous Article Wonder What Those Pro-Choice Hollywood Donors Think Of JBE Now That He Has Their Money
Next Article Coalition calls on Congress to reject corporate welfare, end Ex-Im Bank