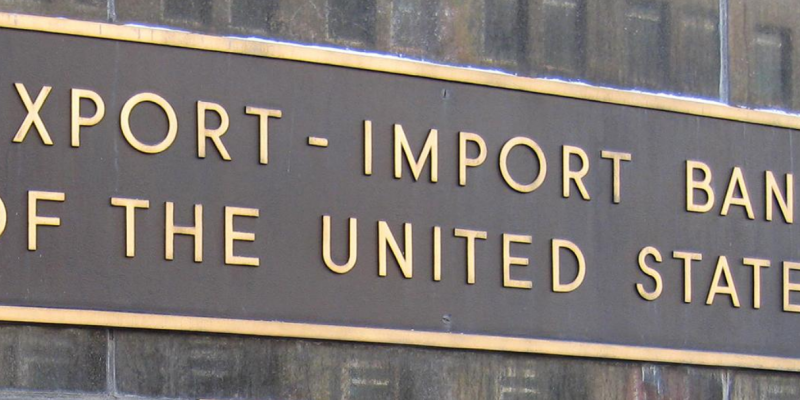 A coalition of groups and organizations representing millions of Americans is urging Congress to oppose the reauthorization of the Export-Import Bank (Ex-Im Bank) that’s slated to expire on Sept. 30.

During the past three years, the bank has lacked a president and a board quorum and has been unable to issue taxpayer-funded export loans and credit guarantees to corporations in excess of $10 million.

President Donald Trump supports filling the board and returning the bank to full operation. Critics say if reconstituted, it would return the bank to the days of using taxpayer money to fund its largest beneficiaries: multinational billion dollar corporations and foreign governments.

The coalition calling on Congress to end the Ex-Im Bank includes Americans for Prosperity (AFP), the Competitive Enterprise Institute, National Taxpayers Union, Heritage Action for America, Club for Growth, Freedom Works, and others.

The bank is a conduit for corporate welfare in the billions of dollars at taxpayers’ expense, they argue. In their letter to Congress, they write that the Ex-Im Bank “grants unfair advantages to a few domestic companies at the expense of many others, all the while putting billions of taxpayer dollars at risk and fostering a danger of internal corruption that has too often materialized.”

The bank is an independent executive agency, but Congress controls the quorum of the bank and its funding mechanisms.

While its supporters argue it doesn’t spend taxpayer dollars, the coalition points to a 2014 Congressional Budget Office estimate, which found that if the bank were to use generally accepted accounting principles, it would cost taxpayers $2 billion over 10 years.

Veronique de Rugy, a senior fellow at the American Institute for Economic Research (AIER) and senior research fellow at the Mercatus Center at George Mason University, points out that the bank is commonly referred to as the “Bank of Boeing” because the multi-billion corporation receives taxpayer dollars through its “small business” fund.

Caterpillar and Boeing were the first- and fourth-largest beneficiaries of “small business” funds, respectively, according to her analysis. Boeing received 70 percent of all Ex-Im Bank loan guarantees and 40 percent of all activities in 2014 before the bank lost its board members and was operating at a higher capacity.

According to a 2014 Cato Institute report, of the 225 domestic non-aircraft manufacturing industries that received a collective $50 billion in loans from the bank, 189 of them incurred higher costs from Ex-Im’s activities than benefits, the coalition points out. Eliminating the bank “would end this harmful practice and instead allow businesses to compete on a more level playing field, focused on creating value for their customers rather than vying for special treatment from government agencies,” the coalition argues.

The Mercatus report found that when funding for the bank decreased, U.S. exports increased from $1.7 trillion to $1.8 trillion between Fiscal Year 2014 and Fiscal Year 2018, adjusting for inflation.

In Fiscal Year 2012, the year the bank received the most aid, the aid represented 2.31 percent of the value of all U.S. goods exported.

“Or to put it another way: during its most active year, over 97 percent of all U.S. exports of goods never received this aid in the first place,” de Rugy said. In other years, the number was higher than 98 percent, she notes.

Ex-Im bank employees have been investigated, accused, and indicted over the years, the coalition adds, pointing to a recent Department of Justice bribery case estimated to cost taxpayers nearly $20 million.

“Taxpayer support of such deplorable and criminal behavior is simply unacceptable,” the coalition maintains. “To reauthorize a government loan program which has, time and again, been shown to be a breeding ground for corruption as well as a wellspring of handouts for a few well-connected businesses at taxpayer expense, would be an insult to the hardworking Americans whose tax dollars are put on the line with each loan authorization.”