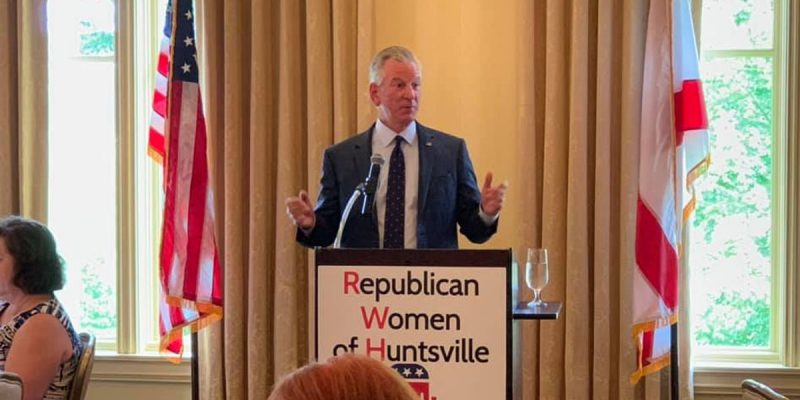 Don’t be too surprised if it is. The former Ole Miss, Auburn, Texas Tech and Cincinnati football coach is running as a Republican in the primary race to unseat Democrat Doug Jones for the Senate next year, and he’s off to a pretty good start…

As he dips his toe into politics, former big-time college football coach Tommy Tuberville has at least one element politicians covet: name recognition.

Mr. Tuberville is seeking Republicans’ nomination to run for Alabama’s Senate seat next year, and his campaign says its new polling shows he’s well-positioned, leading the potential field with 23%, ahead of former state Supreme Court Chief Justice Roy Moore at 18%.

Eric Iverson, president and CEO of Moore Information Group, which conducted the poll, said Mr. Tuberville is not only well-known, but also benefits from being an outsider — with 65% of likely GOP primary voters preferring someone who has not spent years in office.

“Tuberville is the top choice of these voters as well,” Mr. Iverson said.

Chief Justice Moore and Mr. Merrill have not announced candidacies yet.

Mr. Mooney, 68, did not immediately respond to a request for comment.

“Our campaign has the resources and grassroots support to make sure voters across Alabama get to know Bradley and his record as a conservative reformer who supports President Trump and his effort to drain the swamp,” he said.

Tuberville isn’t a bad fit for Alabama as a senator – he’s certainly a better fit than Jones, who as a left-leaning Dem is on the opposite side of the people he represents on just about every major issue. The question is how much staying power the former football coach will have when that primary race is fully engaged.

As to how he’s positioning himself within the GOP field, this Tuberville tweet is pretty typical of the campaign’s messaging…

Our election is about standing up for Alabama.

It's about choosing a leader who will work with @realDonaldTrump to defend conservatism.

Together, we'll #DumpDoug & send Trump reinforcements in the U.S. Senate.

Byrne, a congressman from Alabama’s 1st District, which is centered in Mobile, seems to be the candidate with the largest upside of the race and has been thought of by some as the eventual winner.

Moore’s expected campaign announcement is coming today – but it wouldn’t be expected to move the needle much. While he has a relatively firm base of support among the conservatives in the Heart of Dixie, his loss to Jones marks the former Alabama Supreme Court Chief Justice as a candidate with too low a ceiling to win a Senate race. Yellowhammer News, which covers state politics in Alabama, had this to say about Moore today…

Before a Senate Appropriations Committee meeting, Shelby was speaking to members of the media and was asked about a potential Moore bid, considering the former Alabama Supreme Court Chief Justice is set to make a formal announcement on his Senate intentions on Thursday.

Per pool reports, Shelby said he would not support Moore if he does indeed announce his candidacy, which is widely expected in the Yellowhammer State’s political circles.

“For a lot of reasons known to you and everybody else…I think Alabama could do better,” Shelby emphasized, saying it would be difficult for Republicans to win back the seat with Moore as the nominee.

Shelby reportedly added that he has spoken with former Senator and Attorney General Jeff Sessions, who Shelby believes would be “formidable” and would “probably clear the field.”

“I’ve not encouraged him to run, but he’s a friend,” Shelby noted.

Sessions is not reportedly considering a run for his old seat, vacated when President Trump named him Attorney General in 2017. The special election that followed later that year produced Moore and Jones as the major-party nominees, and Moore’s flaccid campaign, along with a media frenzy surrounding gossip about his dating practices as a younger, single man, contributed to Jones’ unlikely victory.