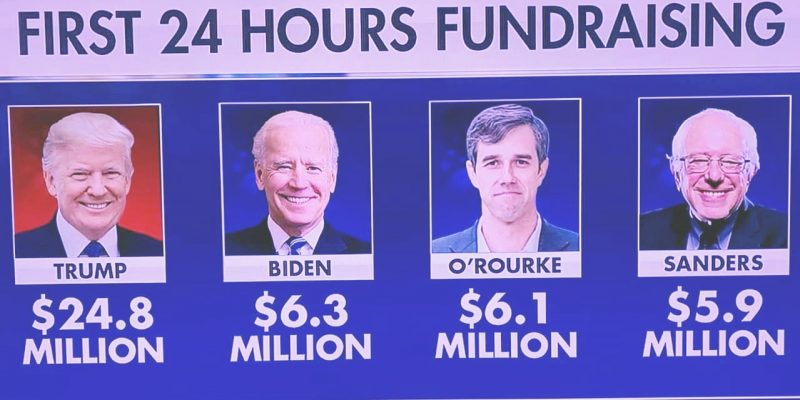 A confident Donald Trump is hitting the campaign trail and raking up massive amounts of campaign cash ahead of his 2020 presidential election.

The shocking sum puts his Democrat contenders first 24-hours to shame, out-raising nearly all of his opponents combined.

RNC Chairwoman Ronna McDaniel made the announcement via Twitter saying,

“@realDonaldTrump has raised a record breaking $24.8M in less than 24 hours for his re-election. The enthusiasm across the country for this President is unmatched and unlike anything we’ve ever seen! #trump2020 #KeepAmericaGreat”

“This shatters every fundraising record! By comparison, Biden raised $6 million… the top 5 Democrats COMBINED only raised $14 million. The excitement for @realDonaldTrump last night was off the charts! #Winning”

“Looking good. We MUST WIN to KEEP AMERICA GREAT!”

Combined with his 2019 first-quarter haul of $30.3 million, President Trump is quite literally “running up the score” on his Democrat opponents more than a year ahead of the 2020 election.

Former Vice President Joe Biden is rumored to have raised as much as $20 million since launching his campaign, dwarfing President Trump’s war chest that approaches $100 million.

Further dampening Democrat hopes for next year’s election, the Trump campaign has an average donation of less than $35. It is a sign that his political machine has mastered the art of recruiting small donations which, in enough volume, can outnumber the wealthiest donors.

More fundraising numbers will be available after the 2nd fundraising quarter ends on June 30.