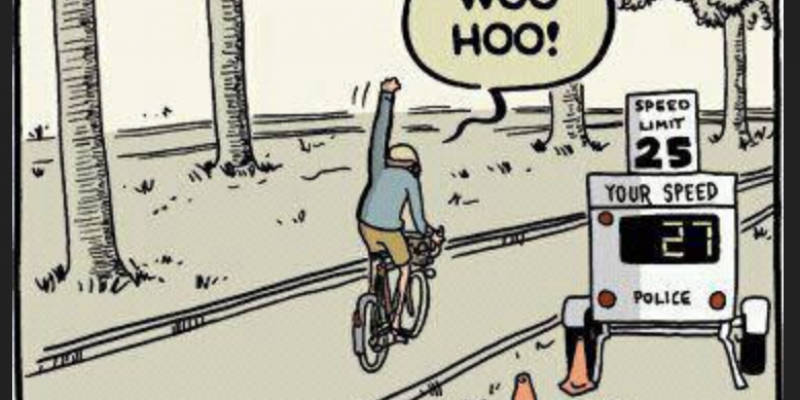 If you go to Denver and ride a bike in one of its parks or trails– and ride too fast–according to bike police– you could get a ticket of $100 or more.

Denver Parks is “stepping up efforts to catch people speeding on bike paths,” KDVR local news reported, where the bike speed limit in Denver Parks set by the city is 15 mph.

Denver Municipal Code bars bicyclists from riding at “a speed greater than is reasonable and prudent under the conditions then existing or in excess of the posted speed limit.”

According to the park administration rules– speeding twice in one year will cost $250 in fines. Three speeding tickets in one year–$500.

A Denver Parks spokesperson said rangers usually issue warnings before doing so, though.

“Our Park Rangers and Trails Team are hosting pop-up safety and educational outreach events to remind trail users of proper etiquette and safety on trails,” Cyndi Karvaski, a Parks Department communications specialist, said. “Our Rangers are monitoring speeds to bring awareness to these issues as well as the 180-day rule that allows electronic vehicles on Denver trails and park facilities.”

You can also get a fine for not speeding– like riding on sidewalks.

According to a Colorado statute, “every person riding a bicycle or electrical assisted bicycle shall have all of the rights and duties applicable to the driver of any other vehicle.”

“Speeds vary as one goes up or downhill and 15 mph is quite slow for a descent,” Brian Weiss, a Denver lawyer who specializes in bike law, said. “It should be noted that in parks the paths are more narrow than streets and most of the Denver parks are relatively flat.”

Gov. Jared Polis signed legislation making it a class 1 traffic misdemeanor for a driver of a vehicle who injures a bicyclist, with penalties of a license suspension and owing restitution to the injured bicyclist.