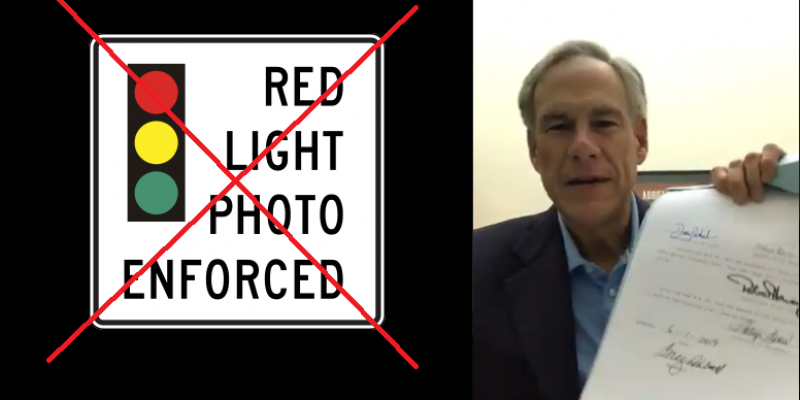 Signing a bill doesn’t take nearly as long as a stop at an average red light. And definitely not as long as it took Rep. Jonathan Stickland to pass his first bill.

Gov. Greg Abbott took to Twitter video for 25 seconds over the weekend to chronicle his signing of HB 1631, by Stickland, a bill to ban automated red light cameras in Texas, his first in three terms which was approved by the House in early May to thunder and lightning.

The ban goes into effect Sept. 1.

In Texas, drivers ticketed by an automated intersection camera system may find themselves assessed a $75 fee on the charge of failure to stop. However, critics pointed out, this places the burden of proof on the defendant (read: not the accuser) as a machine provides the snapshot record of the alleged violation — sometimes in error in reading the license plate or missing the full context of why a vehicle was across the stop-line at the time the image was captured. This makes the bill unconstitutional, many said, including Rep. Stickland. Several supporters also claimed the cameras actually increase intersection accidents.

Supporters of the bill pointed to similar statistics of deadly intersection crashes as being an upward trend, and that proceeds raised by the tickets go to fund emergency trauma centers across Texas.

To help ease the sudden drop in cash flow, an amendment to the bill allows cities to retain cameras until contacts with the camera vendors expire.

A state Supreme Court case is expected to be decided this summer regarding the legality of the cameras.

Interested in more news from Texas? We've got you covered! See More Texas News
Previous Article APPEL: What Happens When The Business Cycle Catches Up To Louisiana?
Next Article Franklin Graham led pastors on Sunday to pray for Trump [video]