We’ve been speculating ever since Gov. John Bel Edwards signed the fetal heartbeat bill that it was potential poison for his re-election. When that bill went to his desk it presented him with a damned-if-you-do, damned-if-you-don’t conundrum – to sign the bill would infuriate an indeterminate, but surely substantial, section of his base voters, but to veto it would put him squarely in the minority on a crucial political issue with a long history of animating Louisiana’s electorate.

And worse, since that bill won 31 votes in the Senate and 79 in the House, there was an outstanding chance Edwards’ veto would have been overridden. Meaning he’d have alienated more than half of Louisiana’s electorate for no reason. For that reason, nobody in the pro-life movement ought to be giving Edwards too much credit for having signed the bill. Vetoing it would have been pointless and suicidal, and giving politicians credit for acting on survival instinct isn’t something anyone should ever do.

Especially when Edwards didn’t solicit that bill from his fellow Democrat, state senator John Milkovich. In fact, Edwards’ allies and a number of the pro-life groups had gone to Milkovich asking him not to bring the bill in the legislative session which concluded last week for the very purpose of staving off his conundrum – once the bill was filed Edwards couldn’t do what he usually does, which is to have his lickspittle Senate President John Alario find a way to kill it before it got to his desk. Any such action by Alario on the fetal heartbeat bill would have brought on very loud, and very true, accusations that Edwards was behind killing a bill to save unborn lives and what kind of fraud would Edwards be to the pro-life movement then?

Milkovich rejected those admonitions, because he needed a good hook for his own re-election after four years of less-than-distinguished service in the Senate that included multiple examples of poor temperament and often just plain oddity. And the response was for former DeSoto Parish sheriff Rodney Arbuckle, an old-time Democrat with a fresh coat of “Independent” paint slapped onto his political brand, to run against Milkovich – and the rumor being Edwards is quietly behind Arbuckle. A Republican, Barry Milligan, has also entered that race – which might well be the most interesting of all the legislative races this fall.

But while Edwards’ camp might have suspected having to sign the fetal heartbeat bill would cause some trouble behind his own lines, it’s a decent bet he didn’t think the reaction would be as negative as it has been. Edwards’ social media accounts have been peppered with negative commenters from the pro-abortion side declaring they’ll never vote for him again for having signed that bill, he’s had national Democrats denounce him as an oppressor of women for having signed it and he’s even had Democrats running for the legislature trash him.

Not to mention here was state senator Karen Carter Peterson, the chair of the state Democrat Party, after Edwards signed that bill…

To be clear, I’m disappointed and disgusted. Women in LA clearly have work to do to EARN RESPECT for our bodies and our CHOICES. Ladies…don’t give up the fight! This is not the time to stand down, we need you to keep weighing in! #MyBodyMyChoice @PPact @TheDemocrats @LaDemos

And yesterday, a poll came out of nowhere by a national polling firm called We Ask America which indicated it isn’t just online trolls and politicians looking to virtue-signal who have an issue with Edwards – he could lose half his base vote off signing that bill. 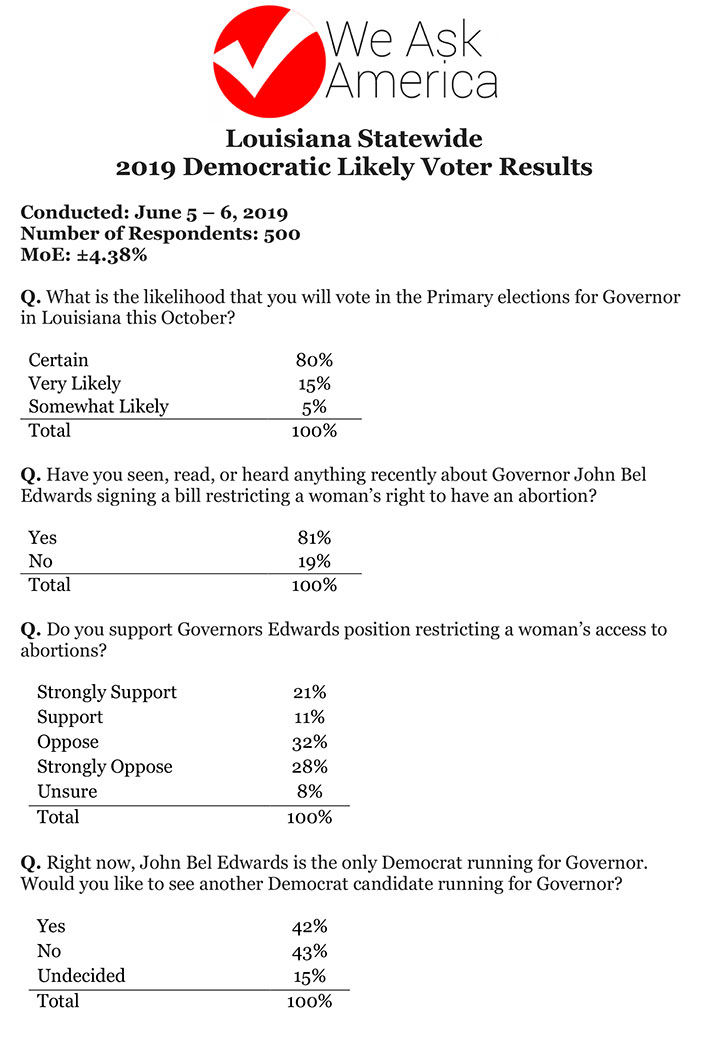 So he’s got 60 percent of Democrats in the state who disagree with his signing that bill, and just under half of that 60 percent strongly oppose the signing – which translates into potentially 10-15 percent of the total Louisiana vote in the October gubernatorial race primed and ready for a pro-choice Democrat candidate. And 42 percent of the governor’s party wants somebody else to get in – though that number could well be coming from a number of other factors beyond just the abortion issue (40 percent of black Democrats polled said they want somebody else, and there are a number of reasons why that would be).

We heard some rumors last week that there will be just such a candidate entering the race, though so far no names have surfaced. We can imagine what that candidate would look like, though – probably white, female, well-educated and professional – perhaps a lawyer at one of the white-shoe firms in New Orleans, not a previous candidate for governor and unabashedly a “national” Democrat who’d run on a full-spectrum left-wing platform with the pro-abortion plank front and center.

If that were to materialize, it would be Edwards’ worst nightmare. Such a candidate could be quite well poised to raise money online from the vast network of left-wing organizations out there – more than enough to get his or her name out to the parts of the Democrat base interested in a more left-wing standard bearer. All it would take are a few national media hits in left-wing publications like the Daily Kos and Slate, a TV appearance on MSNBC or one of the broadcast networks and a succession of digital wins against Edwards and that candidate could easily start showing up with 6-8, or even 10, percent of the vote in the Louisiana gubernatorial primary.

At that point a couple of things are true for Edwards. First, his hopes of winning the election outright in October would be finished. Rather than aiming for 50 percent in the primary, a goal we’ve never thought was attainable for him but that his people have touted as eminently doable, Edwards would then be in jeopardy of running second behind either Ralph Abraham or Eddie Rispone, should one of them emerge with the lion’s share of the Republican vote (Abraham looks like he’s in such a position now; when Rispone unleashes his air campaign it remains to be seen what effect that will have).

And if Edwards runs second in the primary, let’s say to Abraham, he’ll then be essentially where Edwin Edwards was in 1987 – seeing no hope of winning re-election with such an overwhelming number of votes lined up against him, Edwin that year bowed out of the runoff and conceded the race to Buddy Roemer. This Edwards might be a bit more bull-headed than the former one, but the result would be set in stone regardless.

Second, should a somewhat well-funded leftist candidate enter the race Edwards would have no choice but to turn loose his $10 million war chest shoring up his base vote. We know what that would look like – it would consist of going negative against his Democrat opponent, because Edwards’ camp is generally a collection of attack dogs who see everything as a bone to chew on. He’d have to knock that opponent out quickly so as to minimize the damage to his base, before then demonizing Abraham or Rispone for the runoff as a means of reclaiming those Democrat voters then.

But we don’t even know that he could do that.

Because even without a pro-choice Democrat getting into the race the We Ask America poll shows that the abortion issue is now a major weakness for Edwards within his party, and all Abraham and Rispone need to do is bring it up over and over again, and force Edwards to continue touting his pro-life record, thus irritating the 60 percent of his base vote who didn’t like him signing that bill. Those voters are going to be progressively tougher to turn out in both October and November – particularly if they start to believe Edwards can’t win anyway.

This is what’s known as a wedge issue. And it’s a giant one. It portends disaster for the governor.

Interested in more national news? We've got you covered! See More National News
Previous Article SADOW: Louisiana Isn’t Likely To Factor Much In The 2020 Presidential Primaries
Next Article Looks Like The Only Thing Baton Rouge Pols Can Drain Is Money From Your Wallet