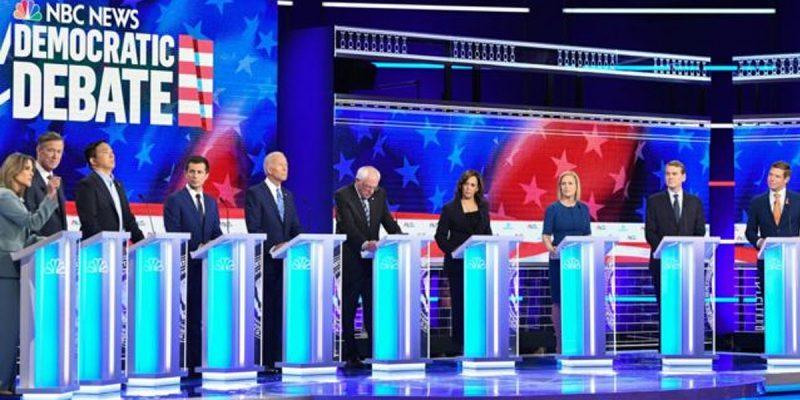 Twenty candidates met to debate on two nights back to back and the results were a predictable mess akin to the pie fight scene in Blazing Saddles (by the way, a belated Happy 93rd Birthday to the great Mel Brooks).

It seems most of the candidates nor the network were quite ready for primetime.  NBC had some technical issues that proved to be embarrassing while the former vice-president’s performance indicated that neither his nomination to the top half of the Democratic ticket nor his election as the 46th president was a done deal.

Below are the contenders and pretenders who did not fare so well.

Senator Cory Booker
The New Jersey Senator had a golden opportunity to use the mostly B-string competition to make a name for himself but failed to fill the vacuum.  Yes he was amongst the most googled but that might have been due to his crazy side glare at Roberto Francesco de Rourke’s Spanish or to determine if the senator was a real person, a CGI figure, or how long he has been in charge of the Bifrost bridge to Asgard.

Congressman Tim Ryan
The Ohio pol made his pitch as the candidate for centrist, flyover land voters but his ounce of credibility evaporated after his colleague from Hawaii shredded him on foreign policy.  The stalking horse for Biden is getting sent to the glue factory fast.

Former Congressman John Delaney
If a bunch of mad scientists concocted from random body parts someone the modern Democratic Party would never nominate it would be Delaney.  Rich, bald, white fifty-something year old looks like someone you’d see chanting “Lock her up!” at a Trump rally than on a Democratic presidential debate stage.  Delaney managed to irk his party base and the moderators for regularly going over his allotted time.

Former Congressman Beto O’Rourke
This fizzling fad is no longer looking like the white Obama but the white Robert Francis O’Rourke.  Beto blew his best opportunity to reset his flagging candidacy and is closer to winning the Jeb Bush Award for most underwhelming presidential candidate than he is the nomination.  Beto was the biggest loser last week.

Former Governor John Hickenlooper
Hick really should not have been up there.  Don’t believe me? Just ask the security guard who thought Hickenlooper was at the venue to pick up a press pass.  The geologist, businessman, brewer, ex-Denver mayor, and ex-Colorado governor would probably be the best president of the bunch but he’s not much of a candidate.  Zipping around on a scooter isn’t going to help him this time.

Entrepreneur Andrew Yang
Ever heard the expression getting fifteen minutes of fame? Well Yang is due another twelve minutes.  Should it surprise anyone that internet sensation was allotted the least amount of time to speak?  And then there was the accusation that his mic was not turned on.  Ironically for Yang his time might have already run out.

US Senator Michael Bennet
Ever thought a presidential candidate would clumsily force a Holocaust anecdote as a talking point in a political debate?  If for not being such an insignificant candidate, the other Coloradan would have been rightly mocked for his crass false analogy just to stand out.  But this is AOC’s new political world.  He’s just running for president of it.

Mayor Pete Buttigieg
At the 2008 Republican National Convention in St. Paul, Sarah Palin famously said, being mayor “is sort of like being a community organizer except you have actual responsibilities.”

Mayor Pete is starting to learn this bigly.  The rising political star that has burned so brightly has been getting burned up back at home over a white policeman who was investigating car break-ins fatally shooting a black man allegedly armed with a knife.  Complicating the matter is that there is no video footage of the incident and while attending a community meeting Buttigieg was mocked by protestors.  Though Buttgieg’s apologists in the media have complimented his handling of the issue in the debate, the incident has exposed a weak-spot for the rising candidate as local criticism (even if choreographed by outsiders) can make headlines across the country and underscores why local office makes for such a bad springboard to national office.

Author Marianne Williamson
This could not have been more weird had L. Ron Hubbard himself was there, thetans and all.  Those who watched the Thursday night debate began formulating in their minds how SNL will parody the candidate who vows to Make America not just Great Again but New Zealand Great!  The self-help guru may be the one candidate that has united internet trolls on the left and right in mockery.  Though like Yang there were accusations of “mic issues” rest assured that Williamson will not exit the stage quietly.  Expect whatever new threshold to participate is set, it will be a bar that somehow includes creepy Julian Castro yet still excludes Mother Love.

Former Vice-President Joe Biden
Vice-President Biden from 2009-2017 looked unbeatable in 2020.  But 1973 US Senator Biden looks very beatable in 2020.  You’d swear Hillary’s team was running his operation as the former veep seemed completely unprepared for an attack that had been telegraphed far in advance of the debate when comments about working with segregationist legislators from the seventies created a headache.  Worse yet the 76-year old Biden looked every bit his “Sleepy Joe” Trump Forever Name.