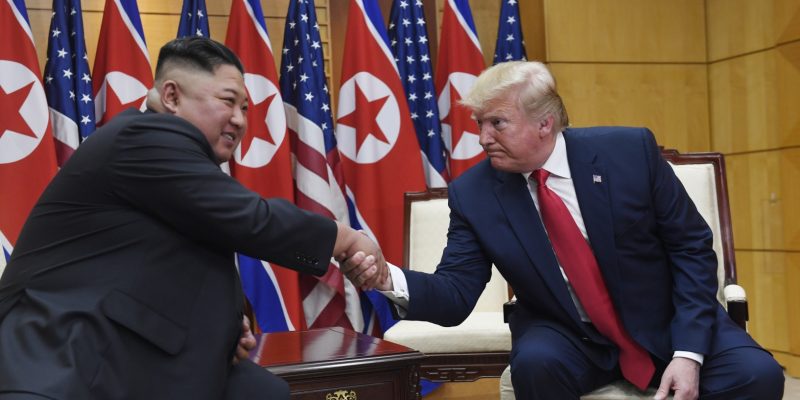 Tensions between the United States and North Korea hit an all-time low last night while most Americans were sleeping. Around midnight US-time, President Trump and N. Korean leader Kim Jong Un met at the demilitarized zone (DMZ) between North and South Korea.

The meeting seemed far-fetched when President Trump made the invitation via Facebook after attending the G-20 Summit in nearby Japan. Evidently, the following message got to Chairman Kim:

“After some very important meetings, including my meeting with President Xi of China, I will be leaving Japan for South Korea (with President Moon). While there, if Chairman Kim of North Korea sees this, I would meet him at the Border/DMZ just to shake his hand and say Hello(?)!”

Chairman Kim made a huge symbolic gesture when he invited President Trump to make history by crossing the DMZ into N. Korea, becoming the first U.S. President to visit the rogue nation.

Chairman Kim then crossed the DMZ into South Korea and held a small press conference with President Trump, another rarity from the reclusive leader of North Korea.

“President Trump just crossed the invocation line, making him the first US President to visit our country.”

The two leaders were then greeted by South Korean President Moon Jae-In and engaged again with the media before proceeding into a building for a private meeting. While press were first barred from entry, It is safe to assume that President Trump got Chairman Kim’s approval before security allowed American press to enter the building.

It is unclear if N. Korean security got that memo as press appeared to fight past a few guards. One member of the press can be heard at the end of the video saying, “I gave a good elbow.”

In the meeting room, President Trump can be heard saying, “The world is watching and it’s very important for the world.”

Chairman Kim’s translator can be heard saying he wants to “put an end to the unfortunate past.”

“I want to thank you, Chairman. You hear the power of that voice? Nobody has heard that voice before. He doesn’t do news conferences in case you haven’t heard. And this was a special moment. This was.. as President Moon said, this is a historic moment, that we’re meeting.”

Watch the historic moment for yourself:

President Trump and President Moon were also given a tour by US forces of some of the military-defense infrastructure along the DMZ: