Editor’s Note: a guest post from Drake Graves, a Republican candidate for Louisiana House District 15 and an opponent of tax increases.

We all know that our roads are terrible and in need of repair. However, it appears that the only solution pushed by politicians in Baton Rouge and special interests groups is to raise our gas tax. And, why wouldn’t they? They’ll immediately benefit by taking our tax dollars and using them to alleviate Baton Rouge’s notorious traffic congestion.

Besides raising taxes, are there other solutions to tackle our “$14.3 billion” infrastructure backlog? Of course there are! But, it involves a word that every politician touts during their campaign and flees from when they’re at the Capital: reform.

We can reform our current gas tax, instead of increasing it. We could increase spending on our infrastructure by about $500 million per year by simply spending our tax dollars where we already expected them to be going. When you factor in federal matching dollars, our annual infrastructure spending would increase to well over a billion dollars per year. The best part? The gas tax doesn’t have to increase! Representative Mark Wright tried to enact this type of reform this year; unfortunately, like most good reforms, it was killed in the Senate. 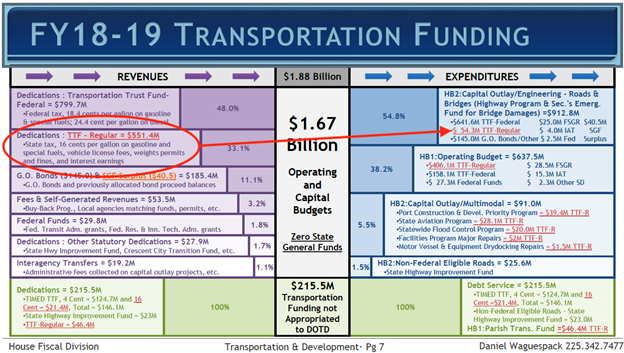 Currently, our state collects $0.20 per gallon of gas. $0.04 of that goes towards the Transportation Infrastructure Model for Economic Development (TIMED) – basically it is used to pay for infrastructure-related bonds. The remaining $0.16 is used for DOTD funding.

Most of us would assume that the vast majority of our remaining $0.16 gas tax is actually going to maintaining and/or building our roads and bridges. However, according to this year’s DOTD legislative presentation, only 1.56 cents of that goes towards roads and bridges.

Yes, you read that correctly! Less than 2 cents per gallon goes where we all expect a gas tax to go. Of the $551.4 million dollars that the 16-cent gas tax collects, only $54.3 million is going directly towards roads and bridges! A staggering 73.7% of the gas tax ($406.1 million) goes towards the DOTD’s operating budget – employee salary, retirements, benefits, building maintenance, equipment maintenance, etc.

While it is true that our gas tax hasn’t been increased since 1989, why should we vote to increase it now when it hasn’t been spent appropriately in the past?

I know that there are better solutions to our problems than simply raising taxes. We have to innovate and increase efficiencies. That is why I’m using YourVote to get your direct and immediate feedback on important issues: such as whether District 15 would rather reform or raise the gas tax.

Ultimately, my job will be to represent the people of District 15; not myself nor the special interest groups that control Baton Rouge. That is why I want you to share your opinions with me by downloading and voting in the YourVote app. Once you download YourVote from your app store, we’ll automatically be connected and you can give me your feedback anonymously with a simple tap of a button!

As taxpayers, we deserve better. We can’t keep sending the same types of people to Baton Rouge while expecting different results. We need reforms, innovation, and legislators who truly desire to serve the people that they are supposed to represent. We need to take District 15’s solutions to Baton Rouge.

If you have ideas or potential solutions to some of our state’s problems, please email them to me at [email protected].

I look forward to serving the people of District 15.