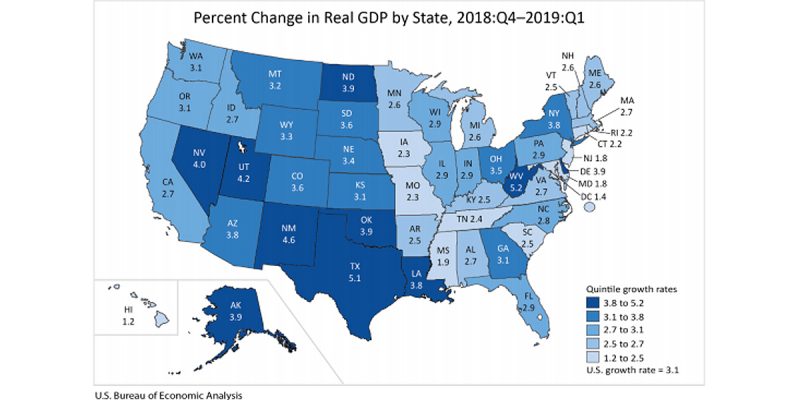 You’re going to hear a whole lot of crowing from John Bel Edwards and his camp about the 1st quarter GDP growth numbers, and after three years of his basically polishing the turd his economic record has been you almost want to give Edwards a pass for finally being able to tell good news and the truth at the same time.

The state’s economy started off 2019 relatively strong, as Louisiana’s gross domestic product in the first quarter grew at a rate higher than that of the nation.

Louisiana’s GDP grew 3.8% in the first three months of the year, while the U.S. as a whole saw a 3.1% increase, according to a report released this morning by the U.S. Bureau of Economic Analysis. All states reported a growing economy in the first quarter, ranging from a high of 5.2% in West Virginia to a low of 1.2% in Hawaii.

Industries that saw the most growth in Louisiana’s first quarter were nondurable goods manufacturing, up 2.09%; retail trade, up 0.82%; and mining, quarrying and oil and gas extraction, up 0.8%. The construction industry in Louisiana, however, fell 0.45%.

Nationwide, the leading contributors to GDP growth in the first quarter were finance and insurance, retail trade, health care and social assistance. Mining was also a top contributor in the three fastest-growing states—West Virginia, Texas and New Mexico.

What’s most striking about the report is how pervasive the growth of the Trump economy is at present. Remember that the 1st quarter is usually the slowest of the four, since consumer spending typically slacks off big-time following the Christmas rush. And yet the economy still grew at 3.1 percent nationally, which is an indication that 2019 is likely to be a very robust economic year despite the continuous doomsaying in the media about how a recession is on the way.

It ought to be remembered, though, that in the first quarter of 2018, Louisiana’s economy grew at 4.3 percent – even faster than this 3.8 percent Edwards is going to crow about. And that held up so well that the state finished 2018 growing at…1.1 percent.

And why? Oil and gas.

New Mexico grew at 4.6 percent, which is attributable to the absolutely runaway economic growth in the Permian Basin, which covers southeastern New Mexico and west Texas – and where a sizable chunk of the population speaks with a Cajun accent because so many of them left Louisiana to earn a living thanks to the industry dying on the vine here. New Mexico’s “mining” sector, which includes oil and gas, grew by an astonishing 3.21 percent in the first quarter. Texas’ grew by 2.0 percent. Oklahoma’s grew by 3.08 percent.

Louisiana’s grew by 0.8 percent, which is actually a lot better than it’s been – but clearly, oil and gas is not what it used to be in this state, and John Bel Edwards’ lawsuits and taxes are a major factor in that.

It will be three more months before we know whether Louisiana’s impressive 1st quarter figure is nothing more than just a blip or an anomaly, or if the state’s economy is actually no longer moribund.