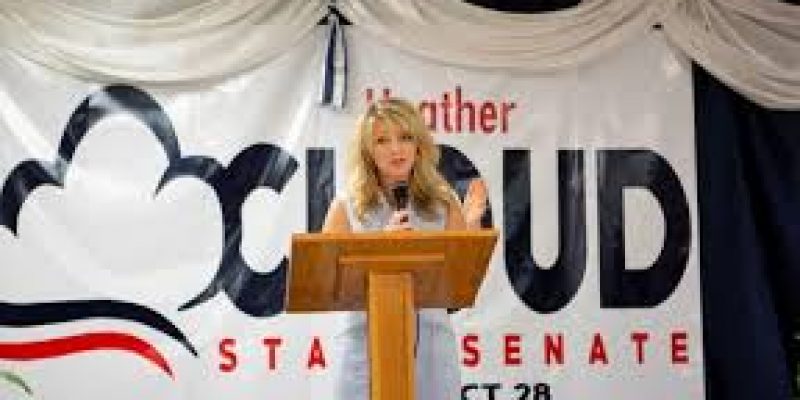 A recent conversation with former Turkey Creek mayor and Senate candidate Heather Cloud about her race yielded some interesting information regarding issues candidates expect will be motivating factors for this fall’s elections. Cloud ran for Secretary of State last year and pulled a respectable five percent against a host of better-known and better-funded opponents. Fresh off the heels of that performance, she’s set her sights on the State Senate. Running in district 28 which encompasses the Parishes of Acadia, Allen, Avoyelles, Evangeline and St. Landry, Cloud is ready to continue being the torchbearer of conservative values.

In a Republican-leaning district that went for Donald Trump with a monstrous 70% of votes and John Kennedy with 69%, it may come as a surprise that Cloud is trying to flip a blue senate seat. Eric LaFleur, a classic big government democrat, is the term-limited incumbent whose 12-year Senate record displayed a love of taxation and regulations, and if District 28 should turn red it might signal perhaps the largest sea change in terms of policy in the entire Louisiana legislature. Chief among the changes to come, Cloud made sure to highlight, is her support for lifting regulations and lowering insurance rates in the state. As a small business owner, Cloud’s trucking company has been strangled by astronomical auto insurance rates and restrictive regulations on her industry.

Her championing of small business is leading multiple industry leaders to stand behind her campaign. Armed with a host of high profile endorsements and a strong canvassing team, many expect Cloud to emerge victorious this fall.

The importance of flipping this seat can’t be understated. Although the State Senate is firmly in Republican control, its short on powerful voices for conservatism. Cloud would immediately become one of the more prominent voices in the chamber, and that’s something we need to happen.

However, Cloud is no stranger to overcoming the odds. Cloud is a survivor of an aggressive cancer that wrapped around her vocal cords, and is taking nothing for granted. “All glory goes to God, it’s a miracle.” This frightening experience deepened Cloud’s faith in her Lord and Savior, as well as strengthened her resolve. She’s a force to be reckoned with.

Two Democrat state representatives, Bernard LeBas and Robert Johnson, the latter currently serving as the head of the House Democrat delegation, are running against Cloud for the Senate District 28 seat.