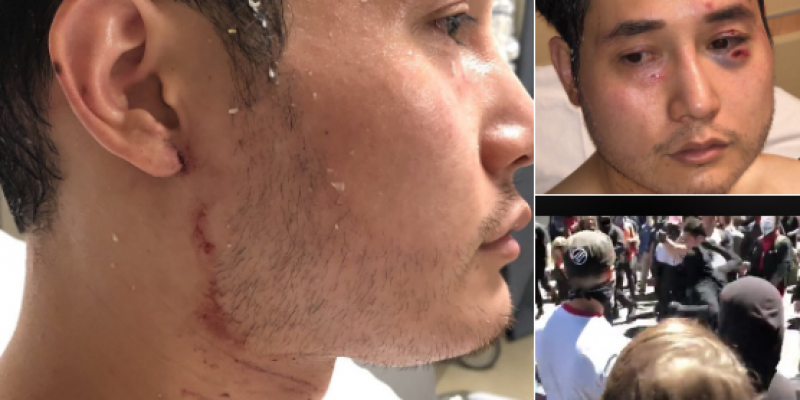 On Saturday, conservative, and gay Asian blogger, Andy Ngo was violently assaulted by fascist thugs wearing black masks who hurled “milkshakes” with quick dry cement in them hitting him in the head, which caused his brain to bleed.

Portland police at the scene stood by and did nothing.

Now Sen. Ted Cruz is calling on the FBI to investigate and bring criminal charges against the mayor, police department for aiding and abetting the criminals who attacked Ngo.

Texas Senator Ted Cruz has called on both the FBI and the Department of Justice to investigate Portland Mayor Ted Wheeler.

“To law enforcement: find & prosecute these violent felons,” Cruz tweeted after the violent left-wing Antifa attacks on Saturday. “To federal law enforcement,” he wrote. “Investigate & bring legal action against a Mayor who has, for political reasons, ordered his police officers to let citizens be attacked by domestic terrorists.”

Troubling, if true. Should “journalists” be inciting physical violence against those with whom they disagree? Calling for assaults with milkshakes apparently laced with quick-dry cement? Is that consistent with journalistic ethics or responsibility? Or the criminal code? https://t.co/A07icUZYGM

UFC Tim Kennedy said the mayor should resign because of the violent and very public act.

What happened to @MrAndyNgo is horrible and inexcusable. The #mayor @tedwheeler should be resign for what he has done to #portland. I feel bad for the @PortlandPolice having their hands tied. The socialists with #antifa are dangerous and un-American. pic.twitter.com/k7PV2YTUgW