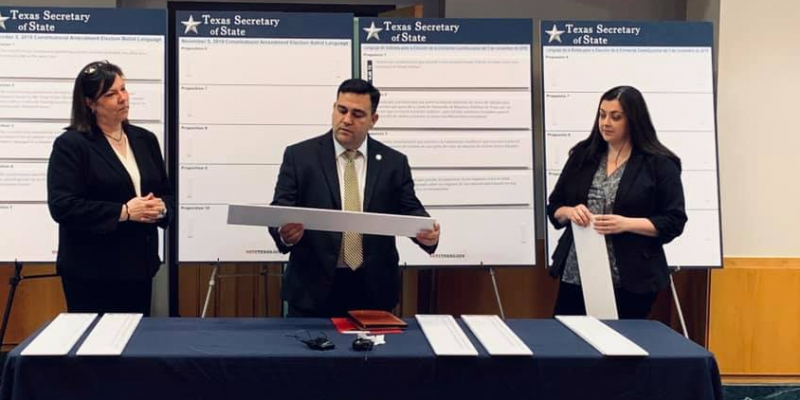 In addition to several local races and ballot options, Texans will vote for or against 10 amendments being proposed to the Texas Constitution this fall.

The order the propositions will appear on the ballot — from headline-grabbing items such as a prohibition on state income taxation to smaller ones like allowing for the transfer of police service dogs to caretakers — was determined Tuesday via a random drawing by Deputy Secretary of State Joe Esparza for the Nov. 5, 2019, election. The propositions are:

The last day for Texans to register to vote is Monday, Oct. 7. Early voting begins on Monday, Oct. 21, with election day on Nov. 5.

“The future of Texas is and will always be in the hands of Texans,” Esparza said, in one of the rare opportunities the state SOS has to grand-stand. “This fall, voters will have the opportunity to directly impact the Texas Constitution, and I strongly encourage all eligible Texans to register to vote so that they can actively participate in shaping the future of the Lone Star State.”

Each of this year’s propositions were approved as a House Joint Resolution (HJR) or Senate Joint Resolution (SJR) in the 86th Legislature and ok’d by two-thirds of each chamber. Certain measures involving constitutional power must be presented as constitutional amendments, as the constitution obviously trumps state statutes and administrative rules. They can be as sweeping as a measure concerning taxing authority for the state (e.g. proposition 4, which would bar the legislature from authorizing an income tax) or they can be local in scope, or sometimes seemingly nit-picky.

While not every proposition needs to have been presented as a constitutional amendment, there is an advantage to sending a measure to the People to decide rather than just the legislators and governor: once an HJR or SJR becomes a part of the constitution (e.g. approved by the voters) it becomes difficult for a future legislature to make any substantive changes.