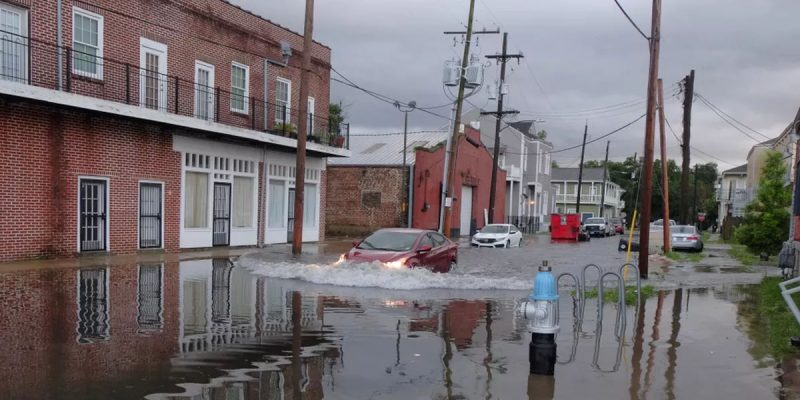 “This is the second time, recently. It’s never been quite this bad,” Spielman told WVUE about floodwaters in front of his art gallery.

Laughably, the brother-in-law of the former mayor told the reporter he keeps an eye on storm drains, but it’s the drivers he really watches. “They’re driving through, pushing water into Commander’s (Palace), trying to push water into my place. I think they pushed water into my car. And it’s just nothing but inconsiderate and stupidity,” Spielman said.

When asked if he believed drivers intentionally tried to flood his business, Mitch’s in-law said, “Oh, I definitely do ‘cause when I’d whistle and yell at somebody, you’d see ‘em speed up.”

It takes considerable nerve for a Landrieu spouse to whine about a city service. Yes, while he technically complained about the cars pushing flood water from the street into his business, brother-in-law Mitch was mayor for eight years and his neglect as mayor was the vehicle that flooded and continues to flood homes and businesses all around New Orleans. Mary Landrieu was a U. S. Senator for 18 years. She didn’t help. Father-in-law Moon Landrieu was mayor for eight years too. The poor state of New Orleans falls very much onto the legacy of the Landrieu family.

This outspoken flood critic story uncovered another interesting and timely piece of information. David Spielman is a talented photographer and his business, The Spielman Gallery, located on Washington Avenue lists Michelle (Shelley) Landrieu as an officer. 1332 Gallery LLC, as it’s registered with Louisiana, will receive a property tax DECREASE according to the nolassessor.com website. 1332 Gallery’s land value and building values remained the same from the 2018 to 2020 year, yet the “assessed building value” decreased from $81,380 in 2018 and 2019 to $67,810 in 2020. 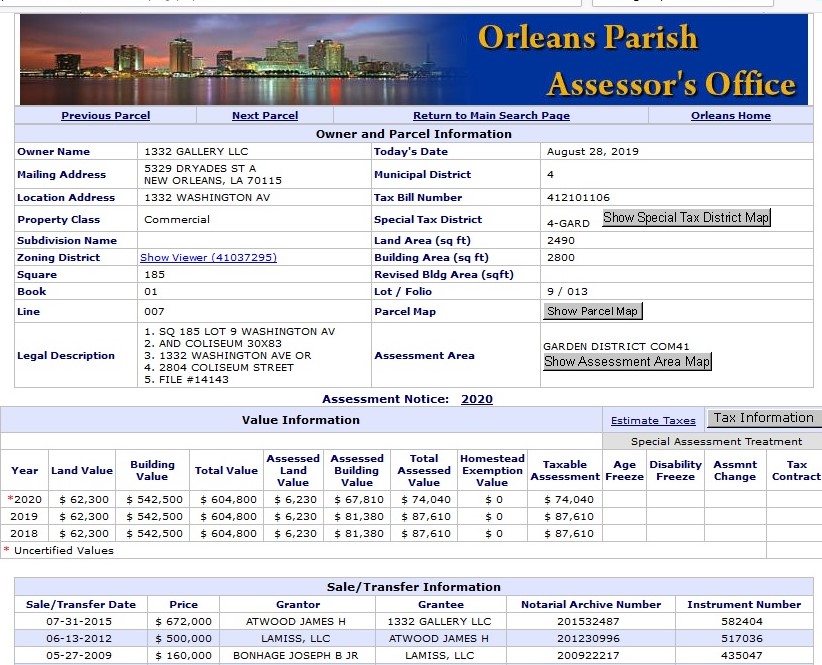 Looking at the other six properties on the same block of Washington Avenue between Coliseum and Chestnut Streets, the neighboring lots are maintaining the same property tax levels, Spielman’s property is the exception to the norm. The entire block bounded by Washington, Chestnut, 6th, and Coliseum streets has 26 properties. Two showed property tax increases in 2020. Two showed decreases; one was explained: “Decrease value, error in square feet and/or classification calcula,” while the other decrease came to Mitch’s brother-in-law. Out of 26 lots, only one was lowered without explanation. While so many New Orleans homeowners face property tax increases, this Garden District business belonging to a Landrieu spouse appears to be getting a tax decrease.

“It was s surprise to me too,” he told us. “I’ve never met or talked with anyone at the assessor’s office. I’m guessing of course but I thought my tax was to high in the past, so maybe they corrected it upon review.”

Something else off with the research is the spelling of David Spielman’s last name. On the SOS website it is spelled “Spiedman” and on the New Orleans Assessor’s website it’s spelled “Speilman.” His website spells it Spielman.

Back to the flood. Perhaps Shelley Landrieu’s husband had a difficult time not “going against the family” for so long. It must have been difficult keeping quiet on Mitch’s terrible performance as mayor of New Orleans. Now, after some time passed, Mitch’s brother-in-law finally had the opportunity to vent. However, his comment about drivers being inconsiderate and stupid should be directed at his brother-in-law because Mitch was inconsiderate and stupid in his attempt to use the elected office as a stepping stone at any cost to the people of New Orleans instead of improving the city.

Spielman, you should know, in the words of Mitch after his negligent flood of August 2017, “the city was going to flood anyway from this particular event” so go take your complaints up with your brother-in-law, sister-in-law, and your father-in-law who were the controlling faction of New Orleans and Louisiana for far too long. Whoever had the sway to miraculously lower your property taxes while nearly the whole city faces increases can probably help with your drainage problem.