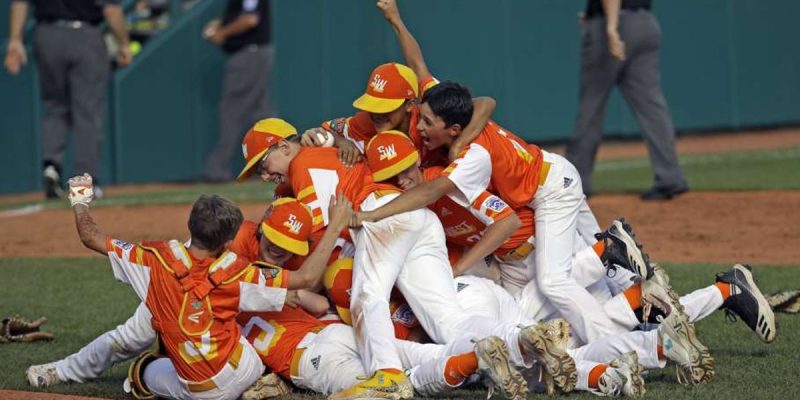 On Sunday afternoon before the first baseball was tossed from the mound in South Williamsport, Pennsylvania, thirteen boys from the New Orleans area had a privilege and honor that very few among us could ever hope to claim.

At that point they were no longer just representing the east bank community of River Ridge or Jefferson Parish or the state of Louisiana but the United States of America in an international sports competition.

Heady stuff for a bunch of middle-schoolers.

Had their story ended there, the River Ridge Little League baseball team would have been a part of something special that they would treasure for the many decades ahead of their young lives.

But through big hits from Marshall Louque and Reese Roussel, great defensive plays, and solid two-hit pitching by Egan Prather these kids emerged from a field of 7,700 teams to be the best in the world by shutting out the Caribbean team from Curacao.

Thousands of boys played the game in the far corners of the globe, a few being extremely gifted whose names we will read in a Major League Baseball box score in a decade and change.

Some had hoped “since childhood” to make it to South Williamsport.  Yet there are only thirteen young athletes who can claim the champions’ mantle.

And that’s the way it should be because if nobody is keeping score, then there are no winners just participants.  And the game becomes nothing more than a “group activity”, a PE venue for individuals to demonstrate their own talent.

That only a relative handful of players from a field of tens of thousands young athletes does not make sports unfair but summons the extraordinary out of those competing.  If you played hard and your team lost your tattered and scuffed-up uniform is your trophy.  There’s a lot to be proud of in that.

There are a number of traits that define America, and the pursuit of excellence is one of them.  It’s not enough to just exist.  In this country, the concept of competition is not dreaded but embraced for it brings out the best in us.

And so it did for Team River Ridge in South Williamsport. And they’re about to have the time of their young lives.

This weekend the players and coaches will be featured in the first of many parades over the next year.

And then there’s the cherry on top as they will also be heading to the White House. Hold the invite acceptance drama and the government shutdown hamburgers this time.

The iconic mansion has hosted some of the most distinguished men and women in world history over the past two hundred years and because of their remarkable achievement those kids will be able to count themselves on the White House’s storied list, not as tourists but honored guests.

To the volunteer coaches who prepared and guided their players and the parents who sacrificed financially and in countless other ways to ensure your sons made practices and games, both near and far, this is as much your moment as theirs.  There are no unimportant jobs or tasks when it comes to raising and molding children.

To the scrappy River Ridge team who overcame the same Hawaii team that had beaten them at the start of the tournament, apply that same tenacity in the face of later challenges, when the bases are loaded against you in life.

In the not too distant future some of these kids will be chasing their baseball dreams on a collegiate level and perhaps beyond that in the bigs.  Others will seek a different yet more stable path in lower profile but still rewarding occupations.  Regardless of where these thirteen boys end up individually as adults, they’ll always have this moment as teammates and they will forever be world champions.

The River Ridge players well-represented themselves, their families, their respective schools, their community, their nation, and the sport itself.

They are the pride of Louisiana.