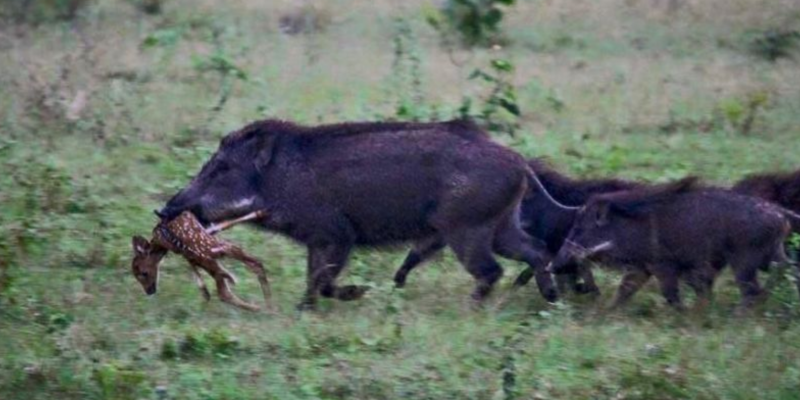 The U.S. Department of Agriculture (USDA) is allocating $75 million in federal tax dollars for a pilot programto mitigate the damage being caused by feral hogs primarily in the Southeast.

These states have the highest feral swine population densities and associated damages in the country, the USDA says.

There are about 7 million feral hogs in 35 states, which include wild boars and sows and hybrids of those that mate with escaped domestic pigs, according to the USDA. They cause about $2 billion in damages every year, the USDA says, because of the practice of “rooting and wallowing,” which tear up fields and crops and destroy water supplies.

Feral hogs tear up fields by digging with their hooves and repeatedly trampling the ground they forage. Their increased presence in areas destroys natural habitats and watersheds where they wallow to stay cool.

The USDA is accepting proposals from non-federal partners to provide landowner assistance for on-farm trapping and related services. Applications are being accepted through Aug. 19 for projects that could take between one to three years to complete.

Awardees will be required to provide at least 25 percent of the partnership agreement budget. The funding limit for a single award is $1.5 million.

Officials in the affected states have all implemented various hunting programs to cull the number of hogs . One includes the Helicopter Hog Hunting program in Texas, which helps landowners, farmers, and ranchers shoot what are primarily European wild hogs, feral hogs and European-feral crossbreeds from the sky.

A 2018 Southwest Farm Press calculation suggested that “Texas is home to more feral pigs than any other state – an estimated 30 percent to 50 percent of all feral swine in the nation, according to USDA.”

According to a 2014 U.S. Department of Energy report, Texas had the largest numbers, accounting for 30 to 41 percent of the nation’s total at the time, depending on the estimates used. States with the next most feral hogs, the report notes, were Georgia and Florida.

Experts estimate that groups of hogs could be eradicated if 60-80 percent of their population were killed every year. But recreational hunting alone cannot accomplish this goal.

The National Park Service, the Nature Conservancy, and the USDA have in the past attempted to mitigate the damage caused by the hogs through various efforts. In less populated states, the USDA has successfully trapped and killed large numbers of hogs in Idaho, New York, Maryland and New Jersey. Iowa, Minnesota, Washington and Wisconsin are not far behind in being nearly rid of the creatures, the USDA notes.

SADOW: Arresting Tony Spell Is Going To Put Political Careers To The Test

"We know Communist China is lying about how many cases and deaths they have, what they knew and when they knew it -- and the WHO never bothered to investigate further. Their inaction cost lives." - Sen. Rick Scott
More Quotes