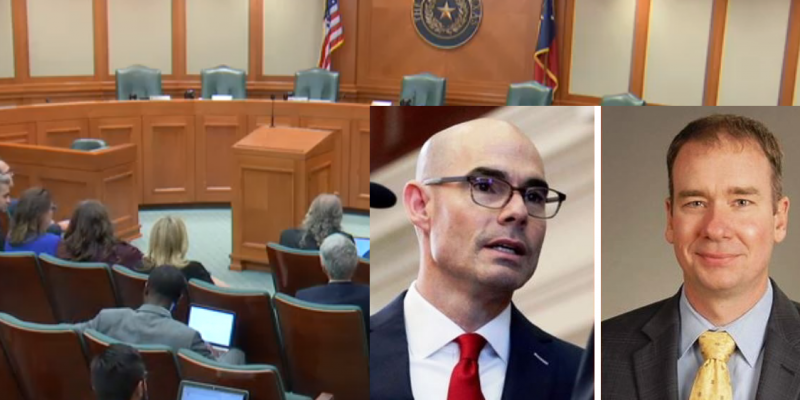 The Texas House General Investigating Committee called a hearing for 10 a.m. today for “consideration and action on the possible investigation into the circumstances, events, and allegations in connection with a June 12, 2019 meeting between Members of the House and representatives of a Texas nonprofit corporation.”

Sullivan reported the details of this meeting in late July and Bonnen denied Sullivan’s account. Burrows remained silent. Sullivan, about three weeks ago, produced an audio recording of the meeting, which has since only been shared with certain individuals. Bonnen issued a very general apology to House members.

Meanwhile, the Texas Democratic Party filed a lawsuit against Sullivan, Bonnen, and Burrows alleging various campaign finance law violations: chiefly that the meeting comprised a de facto Political Action Committee, and that it occurred in the Texas Capitol where campaign meetings are disallowed. The lawsuit was filed in Travis County district court.

From the hip: It was speculated that the committee meeting would be short and mostly in closed-door executive session to grant immunity for the Speaker as lawsuits are filed, as well as to assert the House’s role in investigating (rather than the courts). That was exactly what happened, but with the addition of a call for the Texas Rangers to investigate and to submit a report. See our prior analysis here. Despite the simplicity of today’s meeting and the brevity of any public dialogue, several activists made their way to the committee room to observe, and with the requisite full court of media present.