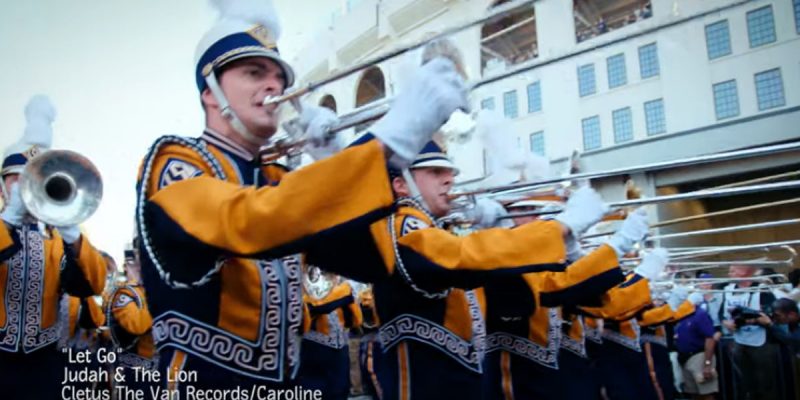 Here’s a little something for those of our readers who are positively starved for college football. ESPN, as you know, features a soon-to-be hit song as their anthem for each college football season – the last two being 30 Seconds To Mars’ “Walk On Water” in 2017 and Imagine Dragons’ “Natural” last year – and then tags that song in pretty much every broadcast of the season on their networks.

The song obviously goes on to be a smash hit.

This year, ESPN has picked another up-and-coming alternative rock band as the standard bearer for the 2019 anthem. The Nashville band Judah & The Lion, whose previous hits include “Take It All Back 2.0,” “Suit And Jacket” and “Over My Head,” did a custom track for this purpose called “Let Go” which ESPN then matched to a video with a ton of college football footage.

And the first frame in the video is of LSU’s band in Tiger Stadium. There are three other frames featuring LSU football, indicating it’s clear LSU is going to be featured pretty heavily by the network in its college football coverage this year.

The video, which was released late Wednesday afternoon…

If you’re a Judah & The Lion fan you might notice this track doesn’t have the signature banjo riffs the band has made famous, but ESPN’s current cultural stance probably doesn’t allow for something as “traditional” as banjo music.

Of course, it makes sense for LSU to be featured heavily. LSU’s first two games – the opener on August 31 against Georgia Southern and the Sept. 7 heavyweight tilt at Texas – are on ESPNU and ABC, respectively, and it’s a good bet better than half of the Tigers’ games will be on ESPN’s family of networks when LSU isn’t featured as CBS’ game of the week. LSU is, after all, sitting at No. 6 in the preseason coaches’ poll, and by every indication this could well be the best Tiger team since the 2011 iteration which won the SEC and made it to the national championship game.

And like that season, the national championship game will be at the Superdome in New Orleans.

It’s been something of a low-key offseason considering how much this team is considered capable of, though you can feel the anticipation beginning to build now that fall camp has begun. But it’s clear based on ESPN’s anthem video that nationally LSU is being considered as a championship contender. That’s something worth noting as the season approaches in just 23 days.