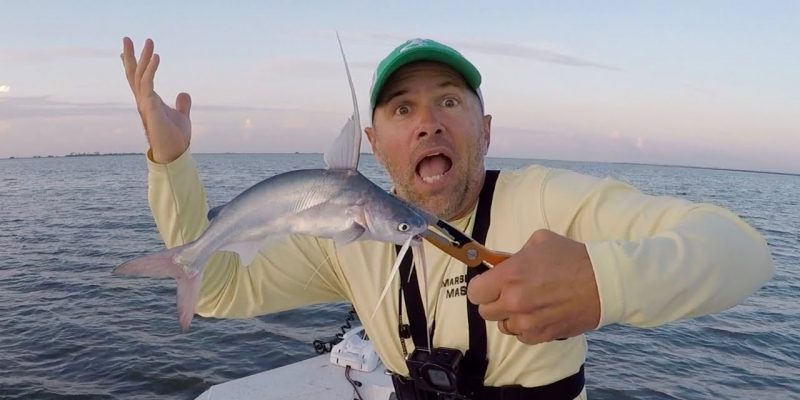 They are the bane of every inshore saltwater angler’s existence. Not only do they steal bait; they raise false hopes, and leave a disgusting trail of boogery slime on fishing line that must be removed before the next cast.

To find out, I returned to the scene of a previous trip, a destination that delivered more gafftops than I would ever want to catch in a year, to see if I could duplicate my “success.”

I arrived to discover that most of the kitties had relocated to other locales, but I was still able to put a couple in the boat with about 15 minutes of effort, using a double-rig under a cork. I then moved on to target more desirable species, and ended up with redfish and bass to complement my catfish.

At the end of the day, I filleted all of my catch, making note of which fillets had belonged to the gafftops, and took them all home to make myself a human guinea pig. Is there anything I won’t do for my viewers?

Much to his chagrin, I forced my son Joel to participate as well, to get another opinion. He was less optimistic than I was, and the results proved to be about what I expected. For all the details, check out the video below.

If you want to give them a try yourself, do so soon. Saltwater catfish leave Louisiana’s interior marshes with the first significant cool fronts, usually in October.

Like the video? Please give it a thumbs-up, and subscribe to the Marsh Man Masson channel on YouTube. Also, leave a comment below or on the YouTube page. Have you ever eaten a gafftop catfish? If so, what did you think about it? What about a hardhead? Ever eat one of them?

Interested in more news from Louisiana? We've got you covered! See More Louisiana News
Previous Article BATISTE: New Orleans Council Is Attempting To Bypass Citizens, Tax Property Owners To Death
Next Article WAGUESPACK: The Facts Behind Our Acts At LABI