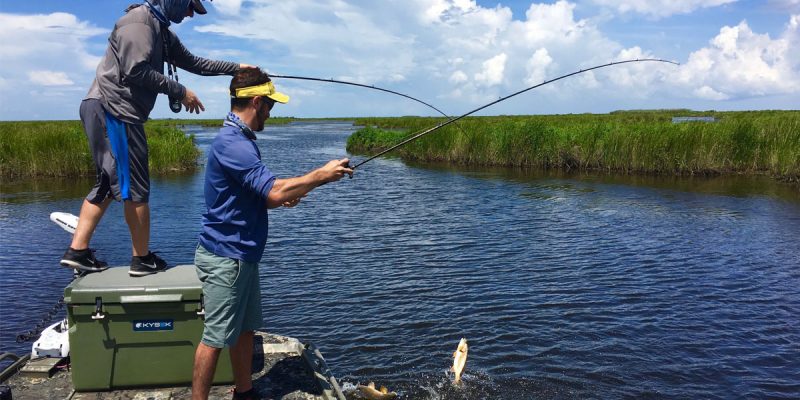 When it comes to specialization, hard-core anglers are a lot like NFL defensive ends. A really good, all-pro-caliber DE will execute a variety of techniques to get to a quarterback over the course of a game. If he’s at an elite level, he’ll be good at all of them, but invariably, he’ll excel at one.

He might bullrush three downs in a row before unleashing his other-worldly spin move that leaves the offensive tackle grasping at air before he sheepishly retreats to help his quarterback go from horizontal to vertical.

Similarly, most hard-core anglers will be competent with a variety of techniques, and can lean on those skills to take advantage of what Mother Nature offers on any given day. But each will have one strategy at which he excels.

For Jonathan Ryan of Jefferson, that specialized technique is floating in water not a whole lot deeper than a mud puddle, and casting at redfish that seem far too big to inhabit such shallow depths. On most trips, Ryan doesn’t cast at any fish he doesn’t first see.

He did that this week while toting my son, Joel, and me along. We launched an hour after sunrise, so great Helios could illuminate the shallow ponds and make it impossible for the redfish to hide.

Despite a persistent west wind and intermittent clouds, the strategy worked well, and we boated our limits of redfish as well as some bonus largemouth bass.

Check out all the action in the video below.

Like the video? Please give it a thumbs-up, and subscribe to the Marsh Man Masson channel on YouTube. Also, leave a comment below. Have you ever sight-fished for redfish? Bass? What do you think of the sport? Are you outfitted to do it regularly?

Interested in more news from Louisiana? We've got you covered! See More Louisiana News
Previous Article DeRay Mckesson’s Rough Day At The 5th Circuit
Next Article Less Than A Week To Go Before The Hayride’s Metairie Extravaganza Starring Kurt Schlichter And John Kennedy!