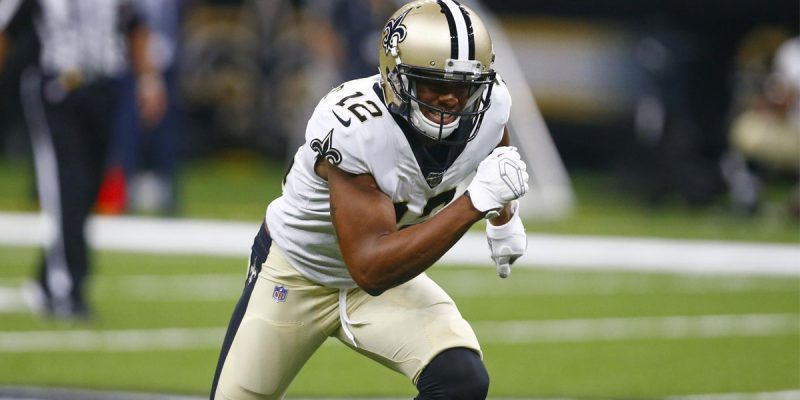 Two ex-New Orleans Saints over the past few days by their comments just gave the public another reason to believe the IQ scores of football players don’t much exceed their shoe sizes.

Wide receivers Rishard Matthews and Kenny Stills offered up their opinions on the nexus of sports and race relations, in truly unfathomably ignorant form. Perhaps unsurprisingly, both players have a history of insulting their country by refusing to honor America’s flag and National Anthem prior to games.

This week, Matthews quit the Saints, asserting he would retire from football. In a social media post after he abruptly left the team this week, he indicated he felt exploited. In particular, he rambled, “Beating your body up over and over for groups of people to give out a small % of the earnings that they don’t even need for me No Longer Exist …. Being around too much Ego to even understand that someone has the same skin as you No Longer Exist … People using me for Entertainment and not understanding that I Am a Black Man in America No Longer Exist.” (Of course, it was tenuous at best whether Matthews would have made the squad, and in fact news reports have it that Matthews was cut.)

If what he asserts is true, this means trouble for the rest of us. As Matthews made over $13.6 million in his several years in the league and still feels disposable, those of us who made about two percent of that over the same span must really take stock of how the American political and economic system has abused us.

But his ideology would indicate most of us can’t, because we’re not black. According to Matthews, officials, owners, advertisers, and whoever “used” him for “entertainment” but apparently in such a way that demeaned his blackness. In the past, Matthews has alleged blacks have faced systematic oppression and intentional police brutality – even though no evidence exists to substantiate that belief.

That begs the question just how one goes about not using him and his blackness, if that amount of money and fame aren’t enough, and give him the respect he’s due. Pay him $136 million over his career? Give pregame black power salutes in the absence of the Anthem? Reparations to the tune of $51 trillion? Lynch Blane Salamoni?

Matching him in stupidity were remarks made by Stills, originally drafted by the Saints then dealt to the Miami Dolphins, upon learning his team’s owner, Stephen Ross who also funds the group Ross Initiative in Sports and Equality (RISE), planned to hold a fundraiser for Pres. Donald Trump. RISE holds itself out as “a national nonprofit that educates and empowers the sports community to eliminate racial discrimination, champion social justice and improve race relations.”

This news about the fundraiser, which happened yesterday, seemed to upset a Stills described as experiencing “bewilderment” that Ross simultaneously could support Trump and the goals of RISE. He issued a social media statement straight out of the political left’s (and the legacy media it dominates) canard (which defines a “racist” as someone who disagrees with its policy preferences on race, rather than upon any objective criteria) that alleges Trump is a racist, despite the incontrovertible evidence that he isn’t.

Somehow, Stills can’t internalize this. He finally rapped with Ross, with whom he has worked on the RISE project, and said they would agree to disagree on this controversy.

At times like this, one wants to rap on the head of the likes of Stills and ask “Is anybody home?” Unfortunately, most athletes aren’t deep thinkers knowledgeable about politics, don’t circulate beyond a homogenous set of acquaintances, and don’t make an effort to think for themselves beyond the superficial. So, misinformed and superficial thinking spreads among them like wildfire.

(As a homage to the left, which delights in peddling conspiracy theories always circling back to blame (1) whites (2) males (3) practicing heterosexuals (4) Christians (5) and those who make decent livings (6) if not all of the above for the ills of oppressive America, I tried to do the same in this case. Saints director of scouting Jeff Ireland drafted Matthews when general manager of the Dolphins and saw off Stills in his trade to the Dolphins, while the Saints’ tight end coach Dan Campbell was coaching for Miami when Matthews and Stills were with the Dolphins. So, if trendy lefties want to understand how Matthews and Stills become “woke,” congratulate Campbell and Ireland.)

Good thing these morons like this only run routes and not for the presidency. Wait, let’s amend that ….