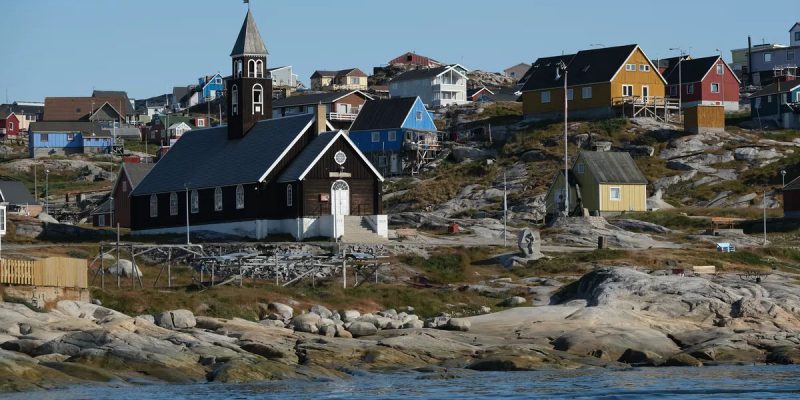 You might think the latest news which has President Trump making noises about purchasing Greenland, which is currently an autonomous Danish territory, and turning it into an American territory, is a bit off the wall.

Citing “people familiar with the deliberations,” the Journal reported that Mr. Trump has “repeatedly expressed interest” in purchasing the autonomous territory from Denmark.

While the Journal cautioned that, according to its sources, Mr. Trump has spoken of buying Greenland“with varying degrees of seriousness,” it also has become somewhat of an obsession.

“In meetings, at dinners and in passing conversations, Mr. Trump has asked advisers whether the U.S. can acquire Greenland, listened with interest when they discuss its abundant resources and geopolitical importance, and, according to two of the people, has asked his White House counsel to look into the idea,” the Journal wrote.

His advisers, according to the Journal, have reacted varyingly, some talking up the Danish territory’s resources while others taking it as a passing fancy.

The immediate reaction from Copenhagen wasn’t an overly positive one…

Danish politicians poured scorn on the idea of selling Greenland to the U.S. after reports President Donald Trump had privately discussed the idea of buying the world’s biggest island with his advisers.

Trump is due to visit Copenhagen in September. The Arctic will be on the agenda during meetings with the prime ministers of Denmark and Greenland, an autonomous Danish territory.

The notion of purchasing the territory has been laughed off by some advisers as a joke, but was taken more seriously by others in the White House, two sources familiar with the situation told Reuters on Thursday.

Of course, Denmark did sell what is now the U.S. Virgin Islands to the United States in 1917. While Danish politicians might be poo-poohing this idea now, it’s not impossible that Trump might make them an offer they can’t refuse.

Why on earth would we care about Greenland? What’s worthwhile about that frozen rock to our far northeast?

Besides the idea that if the planet were to really warm up the way the global warming fanatics keep saying it will, Greenland would then become green, of course (like it was when it was discovered by the Vikings a thousand years ago, long before the internal combustion engine, but that’s a different story).

Much closer to reality, the reason you’d want Greenland is raw materials. It turns out Greenland has lots of them under that ice – and of strategic value to boot. From a Brookings Institute paper from 2014…

Greenland is widely believed to hold excellent potential for a host of natural resources, including zinc, lead, gold, iron ore, heavy and light rare earth elements, copper and oil. Considering that only a small fraction of this massive island has been properly explored, in the coming years more data gathering and analysis would be helpful to assess the full potential of Greenland.

Nobody really knows what’s under that ice, because Greenland is so remote – just like Alaska was when the United States picked it up from the Russians in the 19th century. It turned out that Alaska was loaded with raw materials and ended up as a hugely successful acquisition – quite a different story from the “Seward’s folly” moniker laid on the place when it was purchased.

Only 56,000 people live in Greenland now. It’s a wholly inhospitable place. But it could be an incredibly strategic territory if for only one key reason – those rare earth minerals.

At a time of consolidation and increased regulation of the rare earth sector in China, Greenland may become an important new source of rare earth elements, particularly the elements critical to the growing magnet sector.

Greenland is located in the North Atlantic Ocean between North America and Europe and is the world’s largest island, 2.2 million km2, of which approximately 80% is permanently covered with ice. The Kvanefjeld project, one of the largest rare earths deposits in the world, can be found in the south of Greenland near the town of Narsaq.

The project comprises three linked deposits (Kvanefjeld itself, Zone 3 and Sørensen). These three deposits contain 1 billion tonnes of mineralised ore. The predominant mineral is steenstrupine, which hosts both rare earths and uranium in significant quantities.

In total the three deposits contain approximately 270,000 tonnes of uranium and 11 million tonnes of rare earth oxide. The Kvanefjeld deposit is the largest and most rigorously defined of the three deposits and as a result it is this deposit that is the focal point of studies to evaluate the feasibility of mining and processing for the project.

You’ve likely heard a lot about how China more or less has the world market cornered where rare earth minerals are concerned. This is problematic given the relationship between 21st century technology and rare earths, as it puts the Chinese in a position to dominate some very key industries going forward.

But if the United States was in that game with equal access to those minerals, China’s dominance in those industries doesn’t have to happen.

So buying Greenland from the Danish, who don’t have the muscle to properly exploit that island’s resources, all of a sudden becomes a very rational, and in fact very strategic, long-term move.

We don’t expect to see an NBA team on Greenland, or even a ski resort, popping up any time soon. But if Trump were to follow through on his musings about taking the place on it could very well result in a mining boom in the coming years.

Don’t completely sleep on this idea. It’s worth watching.