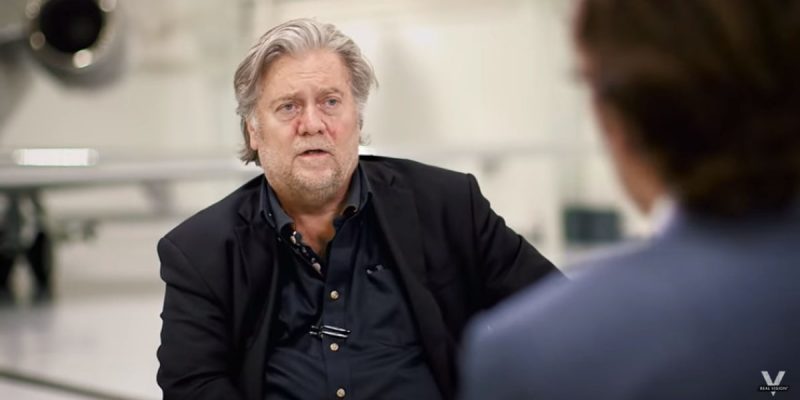 We’re coming a little late to the party on this, as it’s a little over a week old, but Steve Bannon, the former Breitbart CEO and advisor to President Trump, is worth paying attention to as he talks about the geopolitical strategic game going on between America and China. Bannon is one of a very few people in governmental circles who actually understands China as they should be understood – as an opponent.

He’s a little reckless in what he suggests, for example when he talks about the man-made islands the Chinese have built in the South China Sea more or less expressly to impede international shipping and/or hold it for ransom – Bannon says Trump ought to give the Chinese 72 hours to pull all of their military equipment off those islands and dismantle them, or the U.S. Navy would do it for them, which would almost certainly start a war we might not want.

Otherwise, though, his analysis of Chinese strategy and tactics, aimed as they are to establish China as a global hegemonic power for the 21st century, is about as accurate as anything you’ll see, and Bannon’s understanding of what the Trump administration is doing in order to thwart those ambitions comes across pretty well as he explains it.

The Great Game we’re currently playing with China is something the Chinese have been engaged in for about 20 years without much of any activity on the American side. Bannon says that’s resulted in the de-industrialization of the upper Midwest and the onset of the opioid epidemic in places where people used to build things and have been left behind. The internal American dynamics of that are what put Trump in the White House, and while the coastal elites might hate that Bannon intimates American politics is likely going to be driven in large part by the question of how we’ll handle China.

We know how Trump will handle the Chinese. The question might well be how the Chinese handle whichever one of his opponents wins the Democrat primary next year, because China will do everything they can to help that opponent.

Here’s the video. It’s 54 minutes and it’s quite useful in understanding the China situation.