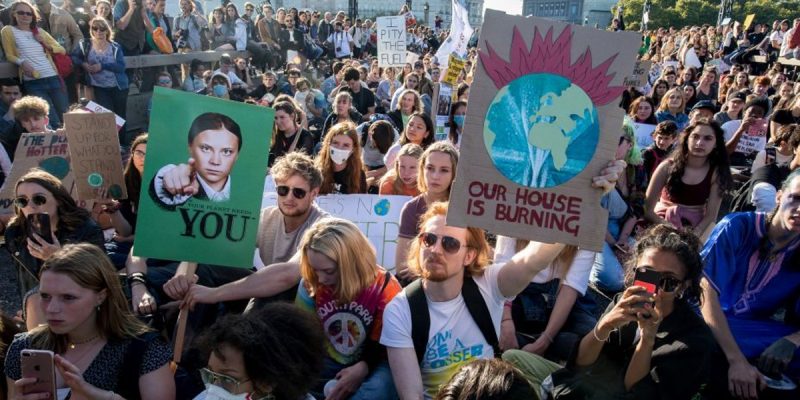 On Friday, activists from around the world mobilized for a Global Climate Justice Strike. The goal of the worldwide protests was to demand action on climate change. The organizers are upset that world leaders are not doing enough to combat what they believe is the most serious problem facing humanity.

Ironically, despite the hysteria, there is not scientific consensus that man-made climate change is even real, Numerous studies, such as the research conducted by S. Fred Singer, show that the theory that climate change is man-made is “in dispute.”

Of course, the facts did not interfere with the protesters participating in the Global Climate Justice Strike. On Friday, demonstrations were held in multiple countries drawing massive crowds. In New York City, over one million school children were given official permission to skip classes to attend climate change protests.

In Pittsburgh, liberal Mayor Bill Peduto offered to sign permission slips for any students who wanted to skip class to attend the protests. At the very least, it was improper and unethical for the Mayor to offer to supersede the wishes of the parents who did not want their children participating in the event. The Pittsburgh Public School district gave permission for students to attend, but only if they received signed consent from their parents, not the Mayor.

Peduto is typical of liberal Democrats who strongly believe that unless massive actions are taken climate change will deliver worldwide catastrophe. The Global Climate Justice Strike was just the latest effort by climate change activists to ramp up interest in their pet project. Despite a constant drumbeat of warnings from educators, Hollywood stars and members of the media, a recent poll found that Americans viewed climate change as only the 15th most important issue facing the nation.

While most Americans are not spending sleepless nights worrying about climate change, it is a major topic among Democratic presidential candidates. There is universal support for drastic action to combat climate change. Even supposed centrist and frontrunner former Vice President Joe Biden promised to end fossil fuel production. Many of the presidential candidates have endorsed the impractical and outrageously expensive $93 trillion “Green New Deal.”

Fortunately, President Trump has not only opposed these unwise actions, but he has also moved the country in a very sensible and pro-business direction. For example, the President removed the United States from the unfair and unbalanced Paris Climate Agreement. He has revitalized the coal industry and is committed to sensible environmental regulations.

In areas such as oil and gas drilling and air pollution and emissions, the Trump administration has reversed or reduced 85 environmental rules. Obviously, the President wants a clean environment, but he also realizes that businesses must have the ability to function without the undue burden of government regulations.

While the President’s policies have clearly worked, the climate change activists have ignored his stunning successes and become even more radical and hysterical. U.S. Congresswoman Alexandria Ocasio-Cortez (D-NY) recently touted the strong possibility of “Miami not existing in a few years” if drastic action was not undertaken. According to the Congresswoman, “what is not realistic is not responding to the crisis.” This is the same genius environmental activist who stated that “the world is going to end in 12 years if we don’t address climate change.”

Today, the call is climate change, but it was a different message in previous years. In the 1960’s and 70’s, climate alarmists warned repeatedly that the world would end unless drastic action was taken to combat global cooling. At that time, the so-called experts were predicting a new ice age was on the horizon.

By the late 1980’s, there was a new cause for climate activists, global warming. Eventually, the alarmists realized that it would be easier to use a catch-all phrase to cover any weather event, so the rallying cry became “climate change.”

If a major hurricane hits the United States, the activists will claim it is evidence of the “climate change” crisis. Of course, hurricanes have been ravaging the United States since long before Americans even used fossil fuels.

In fact, throughout the history of the planet, there have been periods of cooling and warming that occur naturally and are obviously not impacted by the activities of human beings. A much more potent factor in climate change is volcanic activity and cycles of the sun. It is pure folly to pretend human beings can have an impact on either of these genuine and natural causes of global temperature change.

Instead of frightening young people with alarmist hyperbole that the world is ending, it would be better to offer them something truly constructive, such as an education.

Interested in more national news? We've got you covered! See More National News
Previous Article APPEL: Can We Remember To Focus On Educational Outcomes In This Election?
Next Article I Wrote A Novel. It Seems To Be Pretty Well-Received. It’s Available For Kindle Download Tomorrow.