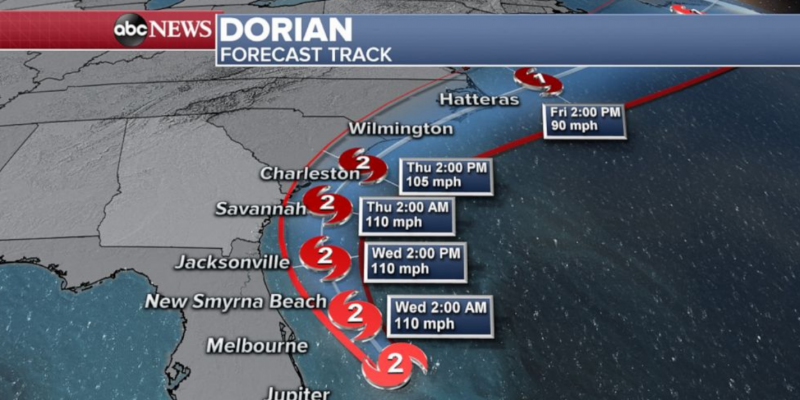 Now a Category 2 with sustained winds of 105 mph, the slow-moving Hurricane Dorian is expected to pummel Georgia and the Carolinas this week.

The National Weather Service projects the storm to hit South Carolina and southeast North Carolina today– with rainfall of up to 15 inches.

Dorian is expected to bring “destructive winds, flooding rains, and life-threatening storm surges” to the Carolinas and, perhaps, the Virginia Tidewater area and the Delmarva Peninsula on Chesapeake Bay, the National Hurricane Center (NHC) says.

“Dorian is expected to maintain its current intensity through Thursday, before a slow weakening trend begins,” the NHC said, noting before that occurs “it is possible that Dorian could briefly regain major [Category 3] hurricane strength.”

Just because the storm has wained and moved away from Florida does not mean people should not still remain cautious, President Donald Trump says.

The U.S. may be getting a little bit lucky with respect to Hurricane Dorian, but please don’t let down your guard. As it heads up the coast, lots of very bad and unpredictable things can happen! On the other hand, the Bahamas have been devastated. We are sending crews to help!

“If you are in the evacuation zones” along the coast, “the time to leave is now,” South Carolina Gov. Henry McMaster said, “Prepare for the worst,” he said, and “pray for the best.”

While Florida may have evaded Dorian’s wrath, Hurricane Season is not over.

A tropical depression in the eastern Atlantic has now strengthened to Tropical Storm Gabrielle—one of several emerging storms starting to pop up on the radar.

Tropical Storm Gabrielle is expected to drift west across the tropical Atlantic this week and the NHC says it could become the next hurricane in the Atlantic Basin.