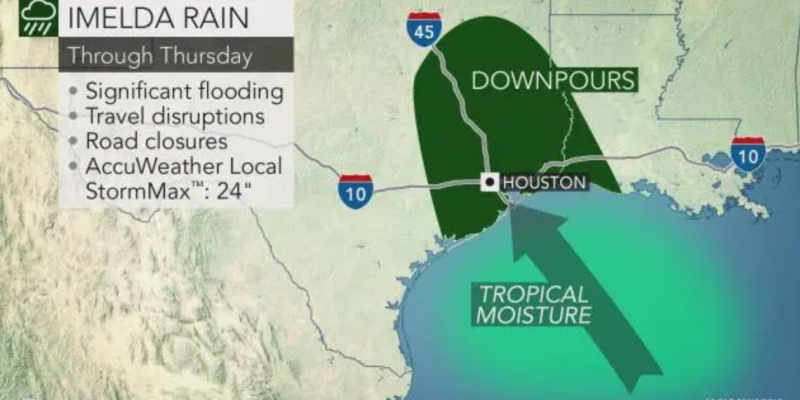 Imelda dumped 22 inches of water within 24 hours, sustaining winds of 40 mph in the Freeport area, and dumped more than 17 inches in Sargent, Texas. Over the same time period, Galveston County received about 10 inches of rain and some Houston areas got up to 9 inches.

The storm “system in the NW Gulf now has a medium chance of becoming a tropical depression before moving inland over Texas,” NOAA reported in an updated announcement Wednesday. “Regardless of development, the primary threat is the potential for life-threatening flash floods.”

Gov. Greg Abbott announced that the Texas Division of Emergency Management was utilizing four Texas A&M Task Force One Boat Squads in the southeast coastal areas, as well as Texas Parks and Wildlife Department boats in the Beaumont region.

“State assets have been positioned for quick deployment in the regions expected to be impacted by these storms and I encourage all Texans in the southeast coastal area to heed all warnings from local officials and pay close attention to weather reports as this system approaches,” the governor said in a statement.

More than 50 officials in the state, National Weather Service and Red Cross are working together at Houston area emergency operations centers to ensure community preparedness and response.

Imelda is the first named storm to impact the Houston area since Hurricane Harvey, the National Weather Service says. Two years ago in late August, Harvey dumped nearly 50 inches of rain in the Houston area, flooding more than 150,000 homes and causing an estimated $125 billion in damage in Texas.

Interested in more news from Texas? We've got you covered! See More Texas News
Previous Article Congessional auditor: Interest payments on national debt to top military spending by 2025
Next Article PERRICONE: Hitler And Stalin Were Both Big Gun-Grabbers, You Know