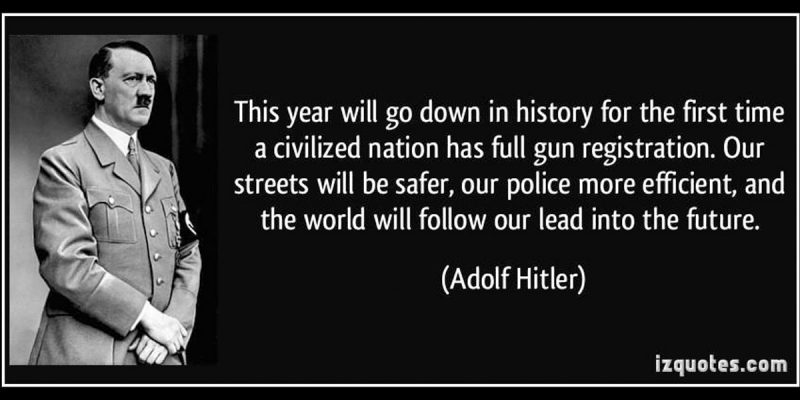 Editor’s Note: A guest post by Sal Perricone, a former law enforcement agent and current author based in New Orleans.

Last night, I watched two shows on the American History Channel entitled “Apocalypse Hitler” & “Apocalypse Stalin.” As some people know, though it is not taught in schools anymore, Hitler was a Socialist and Stalin was a Communist, but both had as their salient method of control over their people a system of gun control and confiscation. Possession of firearms in the hands of citizens was strictly forbidden, which enabled these tyrants to implement other draconian methods of control, most notably the Nuremberg Laws, which was the catalytic legislation that began the Holocaust.

Both men controlled and killed their unarmed people by the millions. Gun control isn’t about guns, it’s about control. Once the people are disarmed and deemed helpless, other forms of mass control are easily implemented, such as high onerous taxes, labor production, collectivism, methods of worship, travel, personal identification, possession of personal property, and even how one spends his time every day, if he’s even allowed to live.

Sound vaguely familiar? It should.

One of the darkest decades in man’s existence was between 1934 and 1944, when both Germany and Russia began systematic campaigns of killing their own citizens, while waging war against each other. Ponder that for a moment. The black cloud of death hovered over Europe and Russia for over a decade and what followed for a generation wasn’t much better. NOTE: I haven’t mentioned Japan’s atrocities before 1945 or Mao Zedong’s extermination of his people AFTER WWII. I don’t want to overload your mind, but I did include a chart for your edification regarding the nexus between gun control and mass death of the people. Read it carefully.

As we embark on another election cycle in the United States, a country where most people mistakenly believe they are immune from the atrocities of the 20th Century, it is imperative with crack open the history books and understand how depraved a man (or woman) can become once given power over the people. In this country, we seemed to have forgotten that OUR government exists ONLY because the people allow it to exist, not vice versa. But increasingly, our elected and appointed officials are confiscating more power from the people under the aegis of “whats good for the people.” This is a prelude to disaster our Founding Fathers anticipated well before the births of Hitler and Stalin. They knew how totalitarian monarchs could be. They experience forced control over their everyday lives and said, “No More,” and provoked a war to gain their freedom.

After gaining their freedom and and independence from English tyranny, they collected themselves and their thoughts and confected an instrument designed to prevent tyrants from stepping onto our soil. It was called the United States Constitution, which ordained the limited powers of a centralized government and the power of the people to enforce those powers, not vice versa. It seems many have forgotten this fundamental tenet of American government, and the current campaign for president is blowing the cover off efforts to plant a socialistic/communistic from of government, which is completely antithetical to the founding of the United States.

But just as the Germans and the Russians were lulled into compliance by their governments, with the aid of a corrupt press, the same thing is happening in the United States NOW. Again, these dark gray atrocities of the 20th Century are not taught in our schools. Our history is being manipulated by those who want to destroy our country and its heritage. They want to disarm and subjugate the people into numb compliance. Succinctly, they want to shred our Constitution and all it stands for under the Mardi Gras mask of Progressivism.

Pay attention to the rabid rhetoric of the left. Watch for similarities in what is said to today and what was said during the 20th Century. Become a student of history, which is the study of man’s behavior in crisis. And once you get your mind around the past, you will see the future quite clearly. Thank you.