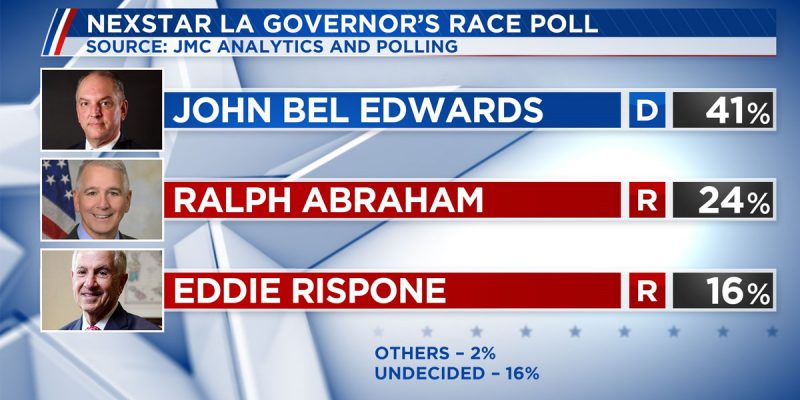 That’s the result of a JMC Analytics poll done for Nexstar TV stations around the state and released yesterday, which gives a picture of the Louisiana governor’s race we’d say is probably about right and perhaps a little closer to the truth than the two previous surveys which had John Bel Edwards at or above 45 percent.

We just don’t buy that he’s doing that well. We never really have. He doesn’t have anything to base that level of support on – not when Edwards’ record is as weak as it is with respect to economic performance.

Nexstar’s poll does confirm something Bernie Pinsonat’s survey of two weeks ago indicated, though, which was that Eddie Rispone has begun sagging – something we interpreted as likely based on the highly inflammatory decision to attack Ralph Abraham this week.

According to an exclusive Nexstar poll conducted by JMC Analytics and Polling in Baton Rouge, Edwards and Abraham remain the front-runners in the race. Edwards remains firmly in the lead with 41%, up from 38% in April. Abraham is second with 24% and Rispone is third with 16%.

16% of those polled were undecided, and much less Republican than it was several months ago.

The poll also finds that, while Edwards has seen an increase in support from white Democrats (going from 40 to 47%), white Independents (going from 28 to 33%), and Republicans (going from 14 to 17%), the entry of Democrat Omar Dantzler into the race has slightly eroded his African-American support. His support among that voter demographic declined from 71 to 69%, while 3% of African-Americans currently support Dantzler.

The data gathered September 14-17 in the Nexstar-commissioned poll doesn’t show that Gov. Edwards can win in the first primary, although analysis shows that the numbers are “tantalizingly close:” if you combine Governor Edwards’ 41% with undecided African-Americans (5.5% of the electorate), that demographic in addition to the Dantzler vote equals 48%. The combined Republican vote (as well as undecided Republicans) represents 44% of the electorate.

What we’re going to take from this is somebody is going to get Omar Dantzler some money to print up yard signs and pushcards with his picture on them to circulate in the black community, because there definitely appears to be an opportunity for Dantzler to walk away with some of that black vote Edwards has yet to nail down, and doing so would keep Edwards from being able to get to 50 percent. Dantzler is doing what he can to help himself, as he’s not scheduled to be on the stage for Thursday’s gubernatorial debate but was filing suit to get put there. And boy, does he have a lot to say about John Bel Edwards and his family. If Dantzler does get to debate on that stage, we could see a serious show.

We’re not here to say Dantzler is going to steal away all of the black vote from Edwards. We are willing to say that by the time the election rolls around, he is going to cut into that 5.5 percent of the electorate people are just assuming Edwards is going to get. And that’s the end of Edwards finishing this race in October, if the JMC poll numbers are correct.