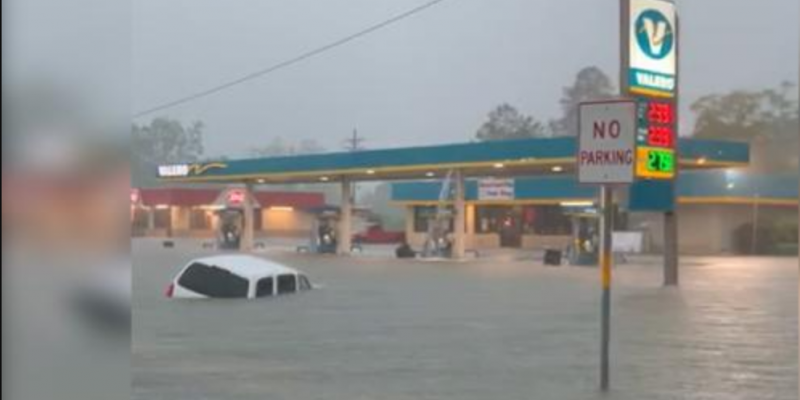 “The State of Texas is working closely with local officials and emergency personnel to provide the resources they need to keep Texans safe from Tropical Storm Imelda,” Abbott said.

In Jefferson County, located in the Gulf Prairie region of southeast Texas, more than 42.6 inches fell in three days. In Hamshire, 25 inches fell in 12 hours, . AccuWeather meteorologists predicted localized rain totals could reach 55 inches in the county before Friday’s end.

Heavy rainfall and flash floods in Harris County alone caused 1,700 combined rescues and evacuations. Wind gusts of up to 50 mph were reported in Houston, the National Weather Service said.

Some of its 4.7 million residents may not see waters recede until the weekend although officials are working around the clock to clear roads, debris, and abandoned vehicles, Houston Police Chief Art Acevedo said. Water-swollen grounds make trees more susceptible to falling over, and flash flooding remains a serious concern, the weather service warned.

After the full ground stop issued at George Bush Intercontinental Airport, the airport has struggled to manage delays in arrivals—which average roughly four hours, according to the Federal Aviation Administration. Metro Houston public transportation is still shut down, and Houston Mayor Sylvester Turner said “high water assets” are still being deployed throughout the city.

The southeast town of Beaumont, devastated by Hurricane Harvey, was again submerged by more than 20 inches of rain.

“The 911 operations center has experienced a heavy call load with over 250 high water rescues and 270 evacuation requests,” the Beaumont Police Department tweeted. “If there is an immediate threat to life safety, call 911.”

High water rescue vehicles and airboats were deployed to rescue residents from their rooftops.

According to Weather.com, between Wednesday and Thursday, 43.15 inches of rain fell in North Fork Taylors Bayou, 33.58 inches near Hamshire, 25.07 inches at Pine Island Bayou, 23.24 inches at the East Fork of the San Jacinto River, 21.69 inches at San Bernard National Wildlife Refuge, 20.40 inches at Beaumont/Port Arthur Regional Airport, 19.59 inches in Humble, and 11.64 inches at Houston’s Intercontinental Airport.

Interested in more news from Texas? We've got you covered! See More Texas News
Previous Article Analysis of Texas Proposition 1: Should Judges Be Allowed To Serve Multiple Cities At Once?
Next Article Louisiana ranks 19th worst on pension-plan funding

“It can’t be right … because the incinerators have been working round the clock, so how can so few people have died? - A Chinese man from Wuhan named Zhang, as quoted by Radio Free Asia, about the official government virus numbers.
More Quotes