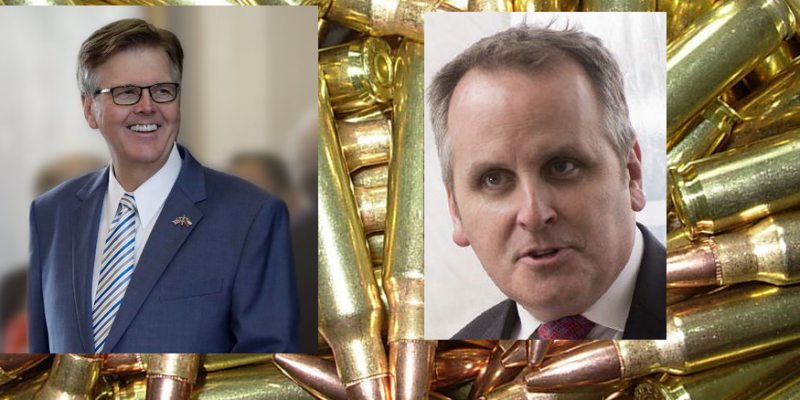 But at that same time, Patrick appointed one of Senate’s top gun rights champions as chairman of a key committee.

“That gap of stranger-to-stranger, we have to close it, in my view,” Patrick told the Dallas Morning News. “Look, I’m a solid NRA guy … but not expanding the background check to eliminate the stranger to stranger sale makes no sense to me and … most folks.”

The NRA’s lobbying wing fired back:

“With due respect, Texas Lt. Gov. Dan Patrick’s ‘proposals’ would resurrect the same broken, Bloomberg-funded failures that were attempted under the Obama administration,” the NRA-ILA’s statement said, and posted as a shareable graphic to social media. “Like most political gambits, Lt. Gov. Patrick’s ‘solution’ precedes his possession of the facts, including this critical concession by the Obama administration: Criminalizing private firearm transfers would require a massive, governmental gun registration scheme.”

Now a word about Sen. Bryan Hughes, whom Patrick appointed Chairman of the Texas Senate Committee on State Affairs.

Hughes replaces Sen. Joan Huffman, who departs to head up the Senate’s redistricting committee. Hughes is one of the legislature’s top supporters of gun rights bills. Just last session, he earned praise from the NRA for the following bills he authored or co-authored: HB 302 to prohibit “no firearms” clauses in rental agreements, HB 1143 which prevents school districts from effectively prohibiting the possession of firearms in private motor vehicles by limiting their authority to regulate the manner in which they are stored in locked cars and trucks (including by employees), SB 741 which keeps HOAs from doing basically the same thing as schools, and SB 772 which is intended to protect businesses that allow open carry of firearms from lawsuits.

From the hip: Lt. Gov. Patrick emerged as pro-background checks during an interview with FOX News, and later verifying that stance on it in various outlets including the Dallas Morning News. What Patrick basically did was signal support for President Donald Trump‘s stance on stranger-to-stranger gun sales. Patrick has also been rumored to be jockeying for a position within the Trump Administration, so the sudden change in position could be due to Patrick tracking closer to Trump rather than Patrick suddenly changing colors on gun control. But that’s a huge “maybe.”

Regardless of Patrick’s intentions, his committee assignments are strongly pro-Second Amendment — as indicated by his tapping of Hughes to head a top committee. Even though Patrick is essentially the “calendars committee” of the Texas Senate, under new Senate rules (that Patrick strongly backed during the 2015 legislative session) it now only takes 19 out of 31 members total in the chamber to vote out a bill. In other words, Patrick could (conceptually speaking) support a measure such as private sales background checks and then “blame” Senate members for banning background checks. That’s an even bigger maybe.

This isn’t Patrick’s first time stepping toward the center on gun rights and matters of public safety. Though he has consistently been a champion for concealed carry rights and campus carry, he appeared to be vacillating on open carry during the 2015 session, earning the ire of some open carry activists.

In 2010, when Patrick was a Senator, he called for metal detectors and tightened security at the Texas Capitol — which was later implemented after years of an open door policy. What led to that security tightening was this: a 24-year-old visitor to Patrick’s office began acting suspiciously, one of Patrick’s staffers called for State Troopers to intervene, the visitor ran away, and later outside the Capitol nervously fired a few shots into the air with a small handgun held in his waistband — all before being tackled by several law enforcement officers already in pursuit.

Speaking of metal detectors, and on the other end of the security spectrum, one of the incidents that propelled then-Sen. Patrick to take on then-Lt. Gov. David Dewhurst was Patrick’s support for a bill that would have outlawed TSA agents from groping passengers at airport metal detectors and scanning devices in the Lone Star State.

All this to say that we will have to get past the immediacy of calls for gun control after the El Paso and Midland-Odessa shootings and wait to see what the Lieutenant Governor really does. Interim charges to committees will tell us the direction he’s headed. Anything else is politics as usual and should be taken with a grain of salt. Patrick’s record of gun rights support and solid conservative committee assignments (e.g. Hughes) should speak louder than a few media interviews — though gun rights advocates are wise to speak loudly on this apparent shift in position.