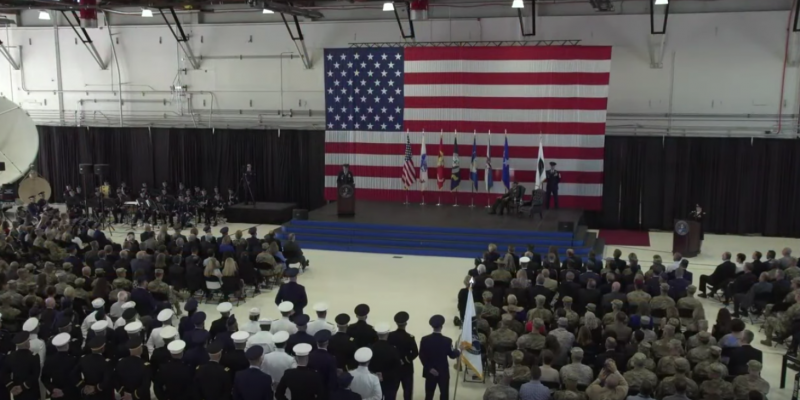 The branch was officially reestablished at a White House ceremony August 29, after previously being in operation between 1985 and 2002.

The USSPACECOM mission is to “deter aggression and conflict, defend U.S. and allied freedom of action, deliver space combat power for the Joint/Combined force, and develop joint warfighters to advance U.S. and allied interests in, from, and through the space domain.”

The ceremony provided an opportunity for soldiers, sailors, airmen and Marines to hear from the Chairman of the Joint Chiefs of Staff Gen. Joseph F. Dunford, Jr., and Gen. Raymond on the importance of the USSPACECOM mission.

“The enduring mission of the Defense Department is to provide combat credible military forces that deter war, protect the nation, and respond if deterrence fails,” said Dunford. “As General Raymond and others have been saying for years, ‘we can no longer take our access to space for granted.’ Space is a contested domain. The implications to that facts effects our ability to fight and win on future battlefields. In that context, we didn’t re-establish U.S. Space Command simply to compete in space. We formed this command as a foundational element of more effective joint warfighting.”

“The reestablishment of Space Command should be understood as part of a broader effort to maintain our nation’s competitive advantage in space,” Chairman of the Joint Chiefs of Staff Gen. Joseph F. Dunford said at the ceremony.

“The Command’s inception couldn’t be more timely,” said Gen. John W. “Jay” Raymond, commander of USSC. “We find ourselves at a strategic inflection point, where there’s nothing that we do as a joint force that isn’t enabled by space.”

The Space Command is temporarily headquartered at Peterson Air Force Base, but Colorado’s congressional delegation has been pushing for a permanent headquarters in the state.

“As the epicenter of national security space, Colorado is the prime location to house national efforts to ensure continued U.S. technological superiority, global leadership, and capabilities in space,” a bipartisan delegation wrote in a letter to the U.S. Department of Defense.

“We find ourselves at a strategic inflection point, where there is nothing we do as a joint force that isn’t enabled by space. Yet, simultaneously, we can no longer have the luxury of assuming space superiority,” Raymond stated as he addressed several hundred in attendance. “The mantle of responsibility that has been passed is heavy indeed. This command will have much to do with the preservation of our nation’s ability to preserve peace, assure our freedoms, and guarantee the sovereignty of the United States for future generations.”

With a first Command salute, Gen. Raymond said, “Let’s get to work.”