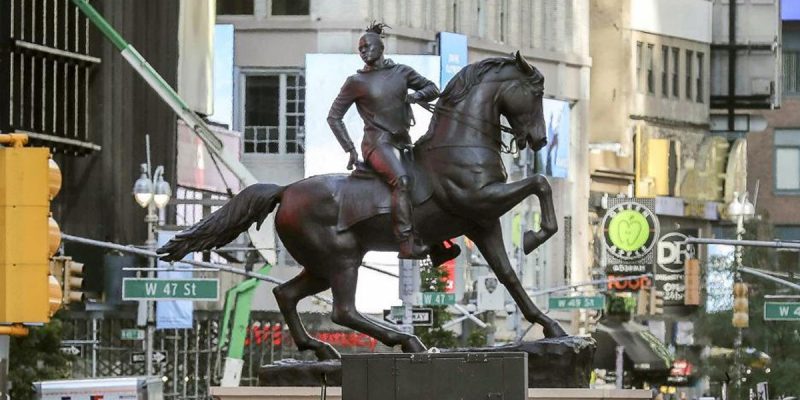 Fake News and leftists are celebrating a new monument that’s truly a missed opportunity. Kehinde Wiley sculpted Rumors of War, an equestrian monument with a man, designed to be African American, wearing a hoody and with his hair in a man-bun sporting Nike shoes. Wiley is known for painting the official portrait of Barack Obama (the one with the floral background).

Rumors of War is being displayed in New York City’s Times Square before it gets relocated to Richmond, Virginia, near the entrance to the Virginia Museum of Fine Arts. Wiley said he wanted it unveiled closer to his home, but it’s safe to guess the event would have likely faced some protest in Richmond.

The Smithsonian posted an article that exemplifies Fake News with bogus, unfounded sentences such as:

“Rumors of War” is pointedly symbolic, infusing its rider with a dignity and regality that lions of the Confederacy sought to destroy.

A later statue of Confederate president Jefferson Davis was “widely understood to be a symbol of defiant racism, the architectural equivalent of a burning cross,” Michael J. Lewis (of Wall Street Journal) adds.

This is a typical leftist move by triggered libs to rewrite history. Rumors of War is completely fictional, and might as well be a leprechaun on a unicorn. Meanwhile the Left doesn’t like monuments of real people. (Unfortunately, what the Left believes to be the truth about those real people they mostly fictionalized as well.) For existing monuments, the Left finds anything that shows a memorialized person didn’t lead a perfect life, by their inconsistent and hypocritical standards,  and condemns the art and the subject in the court of public opinion. Maybe that’s why these sad people had to fabricate the subject of this monument, because they can’t identify anyone that lived up to their unrealistic expectations.

Perhaps the Left’s goal is to make people, generations from now, think all the monuments are fictional characters. The Smithsonian magazine and other leftists want the new monument to “serve as a direct challenge to the (Richmond) Confederate monuments.” This is flawed because Rumors of War unintentionally emphasizes the fact the other monuments are based in reality while the Left lives in a make-believe fairy tale. It boldens the Confederate statues who are true figures in America’s history, individuals that people respected so much that they commemorated them with statues.

Think about it from a tourist’s perspective. They go to see Rumors of War, think wow, this is beautiful, it makes you think. And it’s inspired by J. E. B. Stuart’s monument over there. Yeah, we need to see that one too. They talk amongst themselves: I don’t know much about Jeb. He was a gallant cavalier from the Old South… And now they’re talking about a person and events in time, so Rumors of War’s intent backfires.

The Rumors of War monument was commissioned by the Virginia Museum of Fine Arts. The museum’s director Alex Nyerges said when Wiley proposed the sculpture, “It was the best idea I had ever heard.” Meaning the museum wasted money on this fantasy when they could have memorialized so many worthy African Americans. Liberals blew a great opportunity to embolden and educate through art.