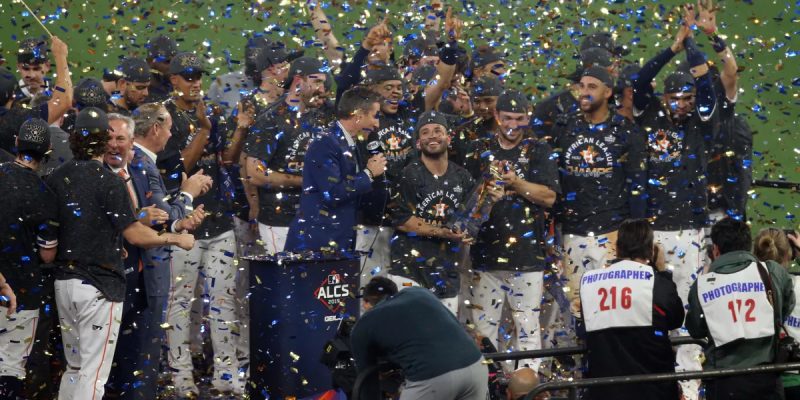 On the evening of October 17, 2005 the Houston Astros stood one strike away from advancing to their first ever world series.

The Astros had a three games to one lead over the St. Louis Cardinals and held a 4-2 lead with two outs in the top of the ninth.

Relief pitcher Brad Lidge just needed to get Cardinals shortstop David Eckstein out to take the Houston baseball franchise where it had not gone before.

Lidge ended up surrendering a hit to Eckstein.  And then a walk to Cardinals outfielder Jim Edmonds.

And then something that would reroute the fortunes of his team’s hopes of winning the World Series when first baseman Albert Pujols crushed a monster shot that gave the redbirds the lead and ultimately the game.

The series then went to St. Louis, which would be the final baseball game at the soon to be replaced Busch Stadium.  The Astros would win that contest and advance to play the Chicago White Sox in the World Series, but the Pujols moonshot proved to be consequential.

Roy Oswalt would end up pitching in game 6 of the NLCS, which he won and was honored as the MVP of the National League pennant contest.  However because Oswalt, the best pitcher on the team, ended up being used to close out the NLCS, he would not appear in the World Series until Game 3, which would go 14 innings.

The Astros found themselves in a similar position in the 2019 ALCS as they sought to advance to their third World Series.

After taking a three games to one lead over the New York Yankees, the Astros needed future Hall of Fame pitcher Justin Verlander to close out the series and face the Washington Nationals in the World Series.  Verlander, who is in a neck and neck race for the AL Cy Young Award with teammate Gerrit Cole, had flustered the Yankees two years ago in the ALCS, dominating the Bronx Bombers in two games and being declared ALCS MVP for his pair of wins.

Verlander wasn’t able to pull it off this time giving up in the first inning the only four runs the Yanks would score, which would prove to be enough.

After the disappointing finish, the big question for Houston Astros manager AJ Hinch was what to do for Game 6: throw his best pitcher (Cole) and thus not have him at maximum availability in the World Series, or take a chance on a committee of relief pitchers stitching together nine decent innings and hope that the bats would compensate.

Hinch did the latter and the gamble returned big dividends.

The Astros used seven pitchers, with only Jose Urquidy pitching a minimum of two innings, and combined with outstanding defensive plays and the clutch hitting heroics of second baseman Jose Altuve to clinch the AL pennant for his team and the ALCS MVP honor for himself.

Thanks to the team effort that kept the series to six games, Cole will open the first game of the World Series and will almost assuredly start game four and perhaps even contribute in game seven if necessary.

There’s a chance that had Lidge managed to live up to his “Lights Out” moniker against Pujols fourteen years ago, the White Sox may have still not only won the series but swept it as well.  But thanks to the Halloween bullpen crew of Brad Peacock, Josh James, Ryan Pressly, Urquidy, Will Harris, Joe Smith, and Roberto Osuna we at least won’t have to wonder what might have been if the ALCS had gone to a game seven.

The Astros got the win they needed in the American League Championship Series and they will have the pitcher they want taking the mound in the World Series.