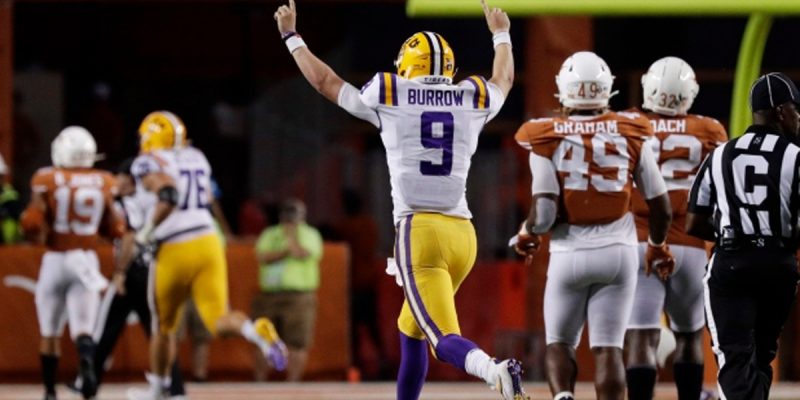 I thought about posting this on a message board somewhere or on Facebook, but as we seem to be All Elections All The Time lately I figured this place could use something of a palate cleanser. And since the Saints and LSU appear to both be in contention to win the whole thing at their respective levels, a little bit of coverage appears warranted.

So here’s a thought about those two teams, which thanks to Ed Orgeron hiring Joe Brady in the offseason and importing the Saints’ passing-system at LSU look awfully similar in terms of what they’re doing on offense.

That Saints’ passing game has been an NFL staple for 13 years, and nobody has consistently stopped it yet. When you consider its longevity and the fact it has worked with so many different combinations of skill players around Drew Brees since the current gang took over in New Orleans, it’s hard to argue with the proposition that it’s the best offensive scheme in football.

Of course, having Brees running that offense certainly maximizes the success of that scheme. Since his arrival in New Orleans he’s been the best quarterback in the NFL. Others might have had more success in the win-loss record, or have won more championships. But the truth is Brees has had less talent to work with than those guys. When you consider that for most of Brees’ time as the Saints’ quarterback his receivers have been Marques Colston, Devery Henderson, Lance Moore, Robert Meacham and guys like that – who were productive players but not superstars – and defense has been present in dribs and drabs at best, you can’t really expect him to win on the level of, for example, Tom Brady. Brees never had a Randy Moss or Rob Gronkowski, though he certainly made some of his receivers look like those guys.

Now he has Alvin Kamara and Michael Thomas, to be sure. If he’d had those guys in some of the previous years it’s not unlikely Brees would have another ring. They’re both huge stars, and they’re better, by a significant margin, than anybody else Brees had to work with in the past.

And yet, this is a star quarterback who has been a sure-thing Hall of Fame player in this system.

Bring the Saints’ system to LSU, as Orgeron did this year, and on the college level you’re now seeing Joe Burrow put up Brees-like results. If the season ended today Burrow would be the odds-on Heisman favorite, he’s more than likely played himself into a first-round pick and might even end up a high first-rounder. And LSU has its best chance of a national championship since making the title game at the end of the 2011 season. Like Brees, it might be arguable to say Burrow is the best quarterback on his level of football, but he’s clearly in the top tier with Tua Tagovailoa, Jalen Hurts, Justin Herbert and Justin Fields.

Burrow was already pretty close to the top tier at the end of last year, though the media experts hadn’t recognized it. His numbers from the final four games of the 2018 season were competitive with some of the best college QB’s, and his performances in the Texas A&M game and the Fiesta Bowl win over Central Florida were certainly top-tier. In that way he was somewhat like Brees, who had begun to emerge as a star quarterback with the Chargers before the Saints signed him. For both quarterbacks, playing in this offense has been an opportunity to elevate to legendary status.

But when Brees injured his thumb in Week Two against the Rams, Saints fans figured this season was likely shot. His backup Teddy Bridgewater, after all, didn’t look great in the season finale last year when he got a chance to start, and Bridgewater wasn’t all that good in the preseason, either. Bridgewater also struggled pretty badly in the Rams game, though given the cascade of penalties against the Saints offense in that game one could argue no quarterback could have effectively moved the ball.

But lo and behold, the more Bridgewater has had an opportunity to settle in over the past five weeks with Brees out, the better he’s looked – at least in fits and starts. Sunday against the Bears, with Kamara out along with Jared Cook and Tre’Quon Smith, Bridgewater was a perfectly solid 23-of-38 for 281 yards and two touchdowns, and no turnovers in leading the team to a 36-25 road win as an underdog. He also won road games at Seattle and Jacksonville, beat the then-surging Cowboys in a defensive battle and lit up Tampa Bay in a performance Brees would have been perfectly happy with.

Brees might well be back on Sunday, and if he is Bridgewater will have delivered him a 6-1 team in first place in the NFC South and very much in the hunt for the home-field through the playoffs. A lot of that is thanks to what could be the best defense the Saints have had since the Dome Patrol in the Jim Mora days, but the offense has been pretty productive even with some pieces missing through the first seven weeks.

And Bridgewater isn’t perfect. Though he seems to be getting a little more decisive in the pocket and he’s getting rid of the ball a little faster he still holds it too long at times and he’s a lot more cautious about throwing into tight windows than Brees. That makes the offense less dynamic than Saints fans are used to, which means more field goals and less touchdowns and it also means he has critics among fans utterly spoiled by Brees.

But there’s no doubt he’s productive, and if you look at his passing stats they’re pretty competitive with other quarterbacks around the league. Bridgewater is completing 67.7 percent of his passes and he’s got a 9-2 TD-interception ratio. You’d like to see a little better yards-per-passing-attempt number than 7.0, but otherwise he’s doing awfully well.

So if you’re an LSU fan, you probably ought to feel pretty good about Myles Brennan.

Brennan hasn’t had much of a chance to show a lot as an LSU quarterback, somewhat like Bridgewater prior to getting thrown into action this year. He’s played in garbage time and his results have been so-so as a result. When Brennan has gotten into games this year LSU has had massive leads and Orgeron hasn’t really wanted him to air things out. He’s running a zone read play out of the shotgun and some ball-control short passes, mostly against defenses selling out at the line and bringing blitzes while sitting on short routes, and he’s been out there with the second offensive unit a lot. As such, you hear a lot of talk about how LSU needs to find a graduate transfer quarterback to take over for Burrow when he finishes his career after this season, how Brennan hasn’t shown anything, and so on.

But logically, this year’s Bridgewater experience in that offense ought to give pause to those critics. The more Bridgewater has been able to settle in the more productive he’s been. There is no reason to lack confidence Brennan, who after arriving at LSU far too thin to inspire confidence as a starting quarterback has filled out nicely and now looks the part, won’t settle in similarly in this system.

We’d like to see Orgeron work Brennan in a little more as the season goes along. Certainly this week against Auburn and in three weeks at Alabama there is no reason to expect him to get any work, but after that, when much easier games against Ole Miss, Arkansas and even a struggling Texas A&M team finish the slate, LSU ought to separate the score early enough to give him some more meaningful game experience with the keys to the offense. And if he falls on his face, then perhaps it might be time to panic.

But if not, or if he’s just serviceable, then consider Bridgewater’s progress. Give Brennan an offseason as the starting quarterback with the skill talent LSU will bring back next year and what should be a pretty veteran offensive line in front of him, and he ought to be just fine.

Because in that system, quarterbacks do quite well. Quite well indeed.