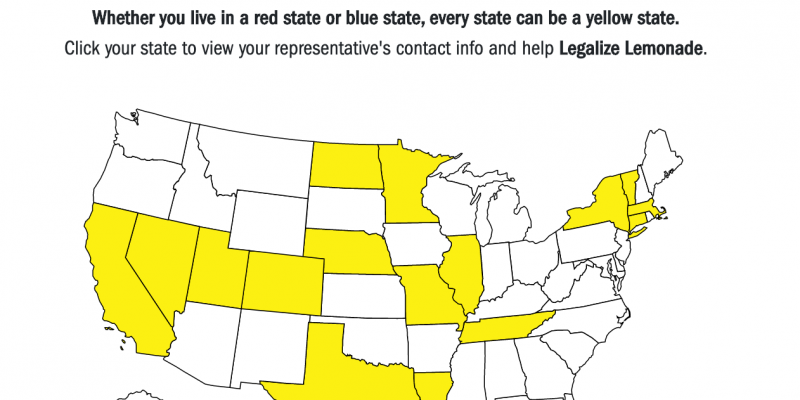 Lemonade stands are illegal in 35 states, unless a permit and/or license is obtained to run one, but a new plan launched by Country Time Lemonade hopes to change that.

“Whether you live in a red state or blue state, every state can be a yellow state,” Country Time’s Legal-Ade site says. Legal-Ade provides resources to help citizens change the law in their states.

As of Sept. 2, the Kraft-owned company awarded $30,000 to parents whose children were fined by local governments for running “illegal” lemonade stands. The company does not offer legal advice or representation.

Local and state governments cite food and drug safety laws for the bans. Some state laws require food retailers to obtain a food processing plant license if they operate mobile or temporary restaurants, or kids to obtain restaurant licenses, business permits, peddler’s permits, and other licenses costing more than $1,000.

Country Time highlights a success story of Coloradoan Jennifer Knowles, whose three sons ran a lemonade stand to raise money for charity but were shut down by law enforcement officers demanding hundreds of dollars in permits.

Knowles helped spearhead a Colorado senate bill, and within nine months, successfully changed local and state law. She continues to help parents try to change the law in other states.

“It’s now legal for kids to sell lemonade at stands,” he said. “We had to pass a law because police shut down a kid’s lemonade stand.”

In Wisconsin, bipartisan bills were introduced in both chambers this year to allow minors to operate lemonade stands without a permit or license on a temporary basis as long as they earn less than $2,000.

“Though it may be easy to argue this type of bill isn’t a priority when larger challenges loom, that would be shortsighted,” Jessica Holmberg, policy and communications associate at the Wisconsin Institute for Law & Liberty, said. “When policymakers look to preserve a sensible space for civil society and youth entrepreneurship, their efforts should be applauded and highlighted.”

State and locoal governments have abused their power “in the name of health, public safety, and the public interest,” Holmberg added.

Illinois is one of 14 states where residents are allowed to have lemonade stands without a permit, Country Time Legal-Ade notes. But some families are still struggling to keep their lemonade or bake stands open because of city and county health department officials.

“Health codes aren’t going away anytime soon,” Austin Berg, with the free market Illinois Policy Institute, said. “And no one is arguing against effective prevention of food-borne illnesses. But regulators should recognize that ensuring community health doesn’t just take the form of surprise inspections and heavy-handed regulations. It means allowing people to share their own special talents with their neighborhood, even if they don’t have the money or clout of an established business.”

Country Time has provided tools and resources to help citizens contact their state and local representatives to change their state laws to allow children to sell lemonade without fear of retaliation from bureaucrats.