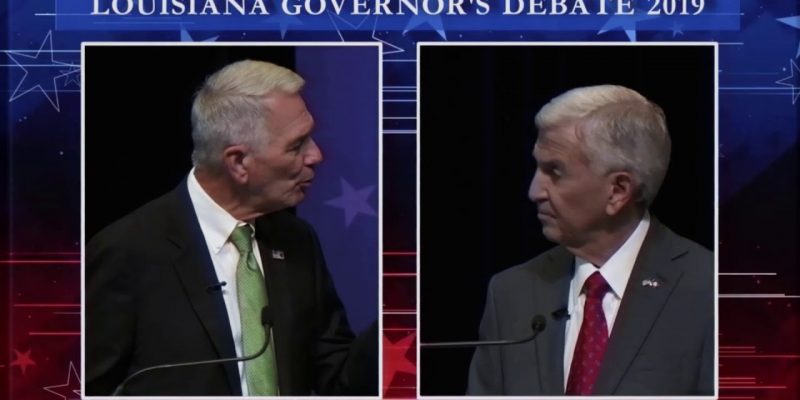 There’s a new TV spot John Bel Edwards is running in Monroe and Alexandria, the two markets making up the majority of Ralph Abraham’s Congressional district, which tries to play on Eddie Rispone’s attacks on Abraham in the primary. Edwards is desperate to keep Rispone from consolidating support from Abraham’s voters, something the latest We Ask America poll indicates he’s having considerable success in doing.

Rispone edged Abraham out of the Nov. 16 runoff election against Edwards after repeatedly slamming the third-term congressman ahead of the primary.

Here’s the spot, which you’ll notice doesn’t bother trying to debunk anything in Rispone’s attack ads…

Know why the ad doesn’t talk about the substance of Rispone’s attacks?

Here’s why – because most of what Rispone said, Edwards and Gumbo PAC said first. That’s something Edwards wants to hide from the target market of his new TV spot.

That stuff about Abraham promising to give his salary to St. Jude and then reneging in his second term? That was a Gumbo PAC hit coordinated with Edwards’ campaign and the Democrat attack-dog outfit American Bridge. The business about Abraham missing votes in Congress to run for governor? Same thing.

Now, we were highly critical of Rispone’s decision to go negative on Abraham. We hated it, for this reason among others. And it was entirely foreseeable that Edwards would attempt to exploit that.

But for those Abraham voters who still haven’t gotten over the fact Rispone attacked their guy, it’s important to remember a couple of things. First, your candidate wasted no time on Oct. 12 when it appeared he was going to finish in third place. He immediately endorsed Rispone, and he stated the reason why – because beating John Bel Edwards and saving Louisiana from a second term with that tax-addicted, pay-for-play liar in the governor’s mansion was and is Job One, regardless who turns out to be the standard bearer in the runoff.

And second, because while Edwards and his political gurus might be attempting to suck up to Abraham’s voters now, Rispone’s attacks were only a regurgitation of fraudulent attacks Edwards had already offered up. Edwards would still be spreading them had Abraham made the runoff, while Rispone would have long since endorsed Abraham and probably would be spending his own money in a PAC trying to help him win.

And more, because Edwards and his camp didn’t just slime Abraham on the St. Jude and vote-missing business, they also accused him of running pill-mill pharmacies pushing opioids when the facts clearly didn’t bear out such statements.

That this effort on Edwards’ part might cause heartburn in Rispone’s camp is probably a bit of justice for having made that decision to go negative, and this needs to be overcome. Abraham’s participation in overcoming it is likely a must for Rispone, and his price for doing so – which as we understand it is going to be helping to pay off Abraham’s million-dollar campaign debt – is not only reasonable but a pretty good investment.

But in the interest of political justice it ought to be overcome, because no matter how bitter a taste might be in the mouths of some of Abraham’s supporters there is no rational analysis which leads to the idea that you’d go against your candidate’s endorsement and support a leftist Democrat who’s destroyed the state’s private economy. Edwards is simply engaging in the practice of setting fires in the enemy camp, which as a political tactic is legitimate but as a matter of enlightening the electorate couldn’t be more shameful.

Let’s hope voters in Monroe and Alexandria reject this sleazy effort on the part of the governor and his cronies.