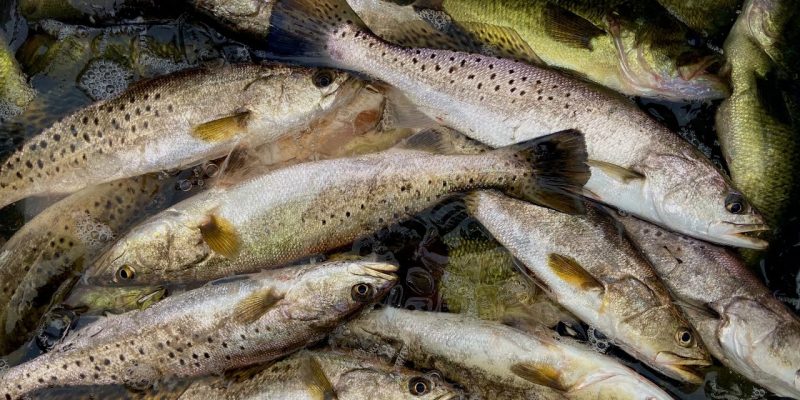 This time of year, with cool fronts rushing through every few days, it’s nice to be able to schedule your trips after the blows settle down. But, of course, that’s not always possible.

It wasn’t for my good fishing buddy Justin Bowles and me this week. Scheduling conflicts gave us only one window, and it happened to be the morning after a pretty stout front blew through. We awoke to winds howling at literally 25 mph at the nearest buoy to where we were fishing, and they didn’t settle much at all throughout the day.

With a leaden sky muting the sun, we opted to target marsh bass early, with plans to turn our attention to speckled trout later in the day after the tide fell for a while. Though we were optimistic, we weren’t entirely sure what we’d catch, since bass are notorious for acting nauseated the day after a front rolls through. But we hoped the hard overcast would counteract the effects of the front.

On my second cast of the morning, we’d get our answer. I cast a Pro’s Choice Senko-style soft stickbait over a flooded grass bed, and twitched the lure once. A feisty marsh bass inhaled it, and erupted on the surface after I set the hook. It was a good omen — and an accurate one. Justin and I caught plenty bass — and a few redfish — the rest of the morning before we turned our attention to speckled trout.

Those fish would prove to be a little tougher to locate, but before long, we had them coming in the boat every cast.

It was a fantastic day deep in the Louisiana marsh, and it’s one that hopefully many other anglers can duplicate over the next few weeks.

For all the details, watch the video below.

Like the video? Please give it a thumbs-up, and subscribe to the Marsh Man Masson channel on YouTube. Also, leave a comment below. Has fishing turned the corner for you in recent weeks, now that cool weather has finally reached the South? What patterns have you been fishing?