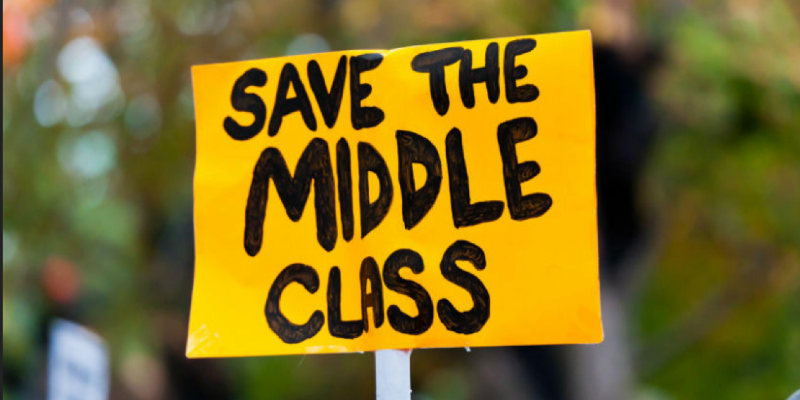 More than 1.2 million Americans moved up into the middle class economic bracket between 2016 and 2018, according to updated Census Bureau data. These individuals earned more than $50,000 in annual income during the period, with median household incomes rising by nearly 2.3 percent adjusting for inflation, the census report says.

Such an expansion of the middle class has not been seen since the 1960s.

The Tax Cuts and Jobs Act (TCJA), passed by Congress in 2017, reduced the individual income tax rate, cut the corporate income tax rate, and doubled the child tax credit, among other provisions.

An April report produced by H&R Block showed that U.S. taxpayers on average paid 25 percent less on taxes in 2018.

Two days after the Census report was released, President Donald Trump announced that his administration is working on further tax cuts for the middle class.

Speaking to House Republicans in Maryland on Sept. 12, Trump said, “We are working on a tax cut for the middle-income people. We’ll be announcing it some time in the next year but it’ll be a very, very substantial tax cut for middle-income folks who work so hard.”

Former Vice President Joe Biden, one of the top candidates for the Democratic nomination for president, said during a town hall in Iowa he would eliminate the TCJA if elected.

“What I’d be focusing on is eliminating the $1.9 trillion tax cut that [Trump] passed,” Biden said.

New Jersey Sen. Cory Booker has also said he plans to eliminate “the toxic Trump tax cuts,” if he were elected president.

Sen. Elizabeth Warren’s proposal, “Expanding Social Security,” would impose a new 14.8 percent payroll, or FICA tax, on individuals making more than $250,000 a year. The proposed tax is evenly divided between employers and employees at 7.4 percent each, and would be levied on top of the existing 12.4 percent FICA tax.

Since launching her presidential campaign, Warren has proposed a wealth tax, a gun tax, a $1 trillion business tax hike, a carbon tax, and full repeal of the TCJA, Americans for Tax Reform (ATR) points out.

ATR has recorded 28 examples of Democratic presidential candidates threatening to eliminate the TCJA. The TCJA “has lowered taxes for every income level in every congressional district,” ATR says.

Democrats have also proposed increasing the corporate tax rate and the capital gains tax, imposing a carbon tax, gun tax, wealth tax, and payroll tax, and increasing taxes on the middle class to pay for “Medicare for All,” among other taxes, ATR says.

“If Democrats succeeded with their promise to repeal the TCJA, a family of four earning the median income of $73,000 would see a $2,000 tax increase, and millions of households would see their standard deduction slashed in half,” ATR Communications Fellow Adam Sabes says. “A single parent with one child making a $41,000 annual income would see a tax increase of $1,300.”