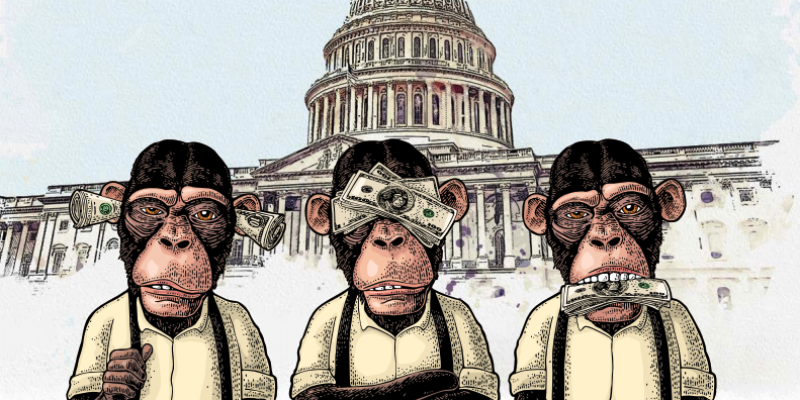 Republicans and Democrats alike take advantage of a pay-to-play system ingrained in the nation’s Capitol, a new oversight report from OpenTheBooks.com maintains.

“Congress writes their own rules to protect their re-election campaigns,” according to the 36-page report, “The Congressional Favor Factory: Legalizing Pay-To-Play – A Study Of Federal Grants, Campaign Cash, Investments, Employment, Power & Influence.”

These members serve on the most powerful committees in Congress, the report states, within “a culture of conflict of interest. The confluence of federal money, campaign cash, private employment, investments, prestigious committee appointments, political power, nepotism, and other conflicts are a fact pattern.”

For example, the report highlights Rep. Larson, whose campaign received the most funding from United Technologies Corporation (UTX), a company of which he is a stockholder.

UTX executives, employees, political action committees and affiliated lobbyists donated $377,050 to his campaign. Since 2010, Larson co-sponsored 19 bills for which United Technologies registered lobbying activity. The company received $83.8 million in federal grants (subsidies) and $16.1 billion in federal contracts (2014-2018), according to the report.

In Michigan, the report notes that employees at the University of Michigan (U-M) donated the most to Rep. Dingell over the course of her congressional career. Dingell is a member of the university’s Ford School of Public Policy Committee, involved with fundraising and networking initiatives. She also co-sponsored four bills for which the U-M registered lobbying activity (2014-2018).

In the last five-years, U-M received federal payments of $2.3 billion, of which the vast majority ($2 billion) was in federal grants.

“As I am sure you know, it is not at all uncommon for members of Congress to be strong advocates for and supportive of the major institutions in their congressional districts or in their home states,” Mark Schlissel, University of Michigan president, said in a statement included in the report. “The University of Michigan is a world-class institution of higher education. Both the main campus in Ann Arbor and the UM-Dearborn campus are within Rep. Debbie Dingell’s district.”

“U-M is one of the state’s largest employers – with more than 50,000 employees across the state – and two of the three academic campuses, along with the Michigan Medicine main campus, are located within her district,” Schlissel adds. “Our employees are free to make personal campaign contributions to any elected official they may wish to support.”

Nothing OpenTheBooks uncovered in its oversight report is illegal, it notes.

“In fact, it’s all legal. Quite possibly, that is the scandal,” it states.

The goal of exposing the pay-for play system is “to hold these politicians accountable,” the report emphasizes.

Information about the federal grant, contract, farm subsidy, and direct payment data was acquired through Freedom of iInformation Act requests from the U.S. federal government and covers four years of records from fiscal 2014 to fiscal 2018, including farm subsidy data over a longer period.